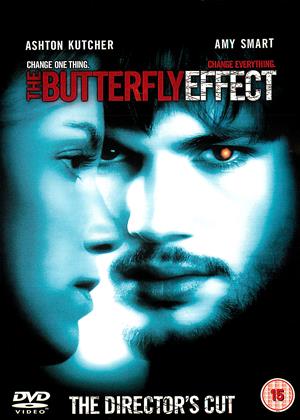 Reviews (14) of The Butterfly Effect

The Butterfly Effect is one of those films that was ignored by most critics, didn’t set the box office alight, but remains one of the best films released in 2004. Thanks to DVD it’s now being rediscovered by audiences in its original directors cut, and is fast becoming a cult classic. The story revolves around the life of Evan Treborn, (Kutcher), who has always suffered from mental blackouts during times of trauma. All through his childhood he would blackout if anything traumatic happened and not recall any memories directly linked prior to the blackout. Now in college, he reads through his childhood journals only to discover these traumatic memories are coming back to him. When he revisits his childhood sweetheart to discuss some of the causes of past blackouts she doesn’t want to talk about it. He finds out however, that he can now induce these blackouts to revisit his past, and in turn change past events. Unfortunately his altering of past events causes negative results in the present (a chaos theory known as the butterfly effect) As Evan, time and again, tries to change events in the past he starts to lose grip of reality. His desperation to fix events of both past and present grows deeper, and each time he changes the past the effect escalates, creating alternate realities, many of which are worse than past events which he’s trying to change. The Butterfly Effect is an inventive, challenging, and cleverly executed film, all wrapped into solid storytelling that keeps you hooked from start to finish. Highly recommended viewing!

Darker, and Better than Expected - The Butterfly Effect review by CP Customer

Who would have guessed that Ashton Kutcher could act? Well, he did and this film is a lot more powerful than could be expected. Eric Bress and J. Mackye Gruber direct well, and make a good job of maintaining tension.

I have to say I am not an Ashton Kutcher fan and I didn't think this film would be my kind of film. However, this film is a real surprise. It follows Ashton trying to uncover supressed memories from his childhood and is based upon the idea that changing one thing may change everything else for better or worse. It is a fantastic thriller and really keeps you gripped from the beginning. The acting was excellent, much better than expected. This is by no means a tennage thriller, it would definitely appeal to an older audience as well. Everyone I've spoken to said they were really surprised by the film and thought it was great (including men). I highly recommend it!!

an understated classic, this film poses a simple plot line, what if and it sure does three or four fold ............... a ripper sadly the sequal isnt up to it

When I saw that this films star was Ashton Kutcher I was a little worried because of the non-comedy nature that he is so famous for. But I found myself enjoying this film very much so. The plot, storyline, cast and length were prefect. And the extras are also worth watching.

B movie - The Butterfly Effect review by 'Neil'

this is a complete B movie that just manages to be watchable, lots of different bits of plot are crammed in and some of the script is just laughable. however i did keep watching to the end somehow but was amazed how this film got 9/10.

Watch it! - The Butterfly Effect review by CP Customer

Brilliant, breathtaking, original, imaginitive, compelling. Makes us examine how personalities are affected by experience. Comparison with 'Sliding Doors' (which I also thought was a great film) doesn't do it justice- multiply by 10.

I really enjoyed this film. It kept me on the edge of my seat all the way. I would recommend it to anyone - however there were a couple of disturbing scenes - but don't let that put you off!

worth watching - The Butterfly Effect review by CP Customer

I was pleasantly surprised by this film. Had a Donnie Darko feel to it but a little easier to follow with more humour. Well worth a look.