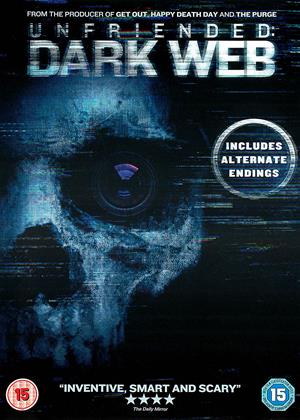 I couldn't watch this film at all as it was just like watching someone on their computer screen, no acting what so ever, of I could of given it 0 stars I would of done

Good movie if you can stick with it I had to Stop it and start it again from the beginning on my Laptop because the Much of it is too small to see on the TV screen across the room.

As the story unfolds on a group of friends laptops whilst on Skype and Facebook and via emal the typed words are soo small on screen unless you have a Massive TV .that you just cant read them. must have been fine on a Cinema Screen but my TV is an Average 60 inch screen and I couldn't see the typed messages clearly enough without moving closer to the screen ,so my Laptop in my lap made it more watchable .

I would say Don't Bother if your distance eyesight is poor or your TV isn't Massive . just too much small print to read all through the movie to cope with ,and without it you cant follow the story at all.

Once you are able to manage that ,I did thanks to my laptop.It is a pretty good movie ,Creepy and leaves you thinking about what is out there on the internet really .

Not for me - Unfriended: Dark Web review by TH

I've seen the first one which was ok and this is mostly the same thing but I think the idea of seeing through a laptop doesnt really add to great film.

Too clever for its own good - Unfriended: Dark Web review by NW

I agree with most of the other reviewers, especially with the observation that the messages on the lap top are hard to read (too small for me).

The film is probably the bright idea of a computer geek, and in many ways is technically very accomplished. But the execution leaves something to be desired, not least the plot.

It’s not that the premise of 2015’s Unfriended doesn’t have some potential as a horror picture staged entirely on a desktop. The fact that some mysterious all-knowing killer is hidden behind corrupted webcams and hacked social media could weave a more competent staging of terror for the technological age. But we’ve been down this road before, where the internet is a spooky place of horror most over-the-top and ludicrous. And while Unfriended: Dark Web thankfully avoids many of these pitfalls by targeting a more reasonable and relatable aspect of online scariness, the foundation behind this clever use of computers for a somewhat budgeted horror still has a bit of a way to go.

Once more, we’re thrust into the desktop environment of Skype hangout with victims, this time what seems more like youthful adults than snotty teenagers. And there’s actually quite a bit to like about these characters as opposed to the last lot. We have an eccentric IT guy, a cooky conspiracy theory chap, an Asian DJ, and a lesbian bi-racial couple who are going through some tough times after one of them came out and one of their moms have brain cancer. The only character we don’t seem to care so much for is our lead character, running the desktop that he snagged from his work’s lost and found bin. It doesn’t belong to him and the original owner comes chatting online for it to be returned. If not returned, bad stuff is going to happen, both to the owner and the current user.

Of course, it’s too late to return the laptop by the time our lead gets done with his lying, reasoning that he just needed a better laptop to easily communicate with his deaf girlfriend. As a result, we’re treated once more to the crazy, pixelated kills. This time, however, the murders seem less paranormal and more real, citing the dark web as the source for how this killer or killers are operating. Granted, there are some huge leaps in logic to make this work and even the surprise pullback at the end of the picture does little to answer for who the true killer is without a heaping dose of nihilism.

Though technically sound, including great use of real applications and well-timed messenger segments, the film quickly loses its allure when it soon dawns that the film ultimately amounts to little more than another commentary on how insidious the online world can be. And so we’re not meant to learn anything about the killers or find anything profound in the act of the killings, only to witness cruelty most contrived. In the original Unfriended, the deaths seemed to have some understanding of revenge against the unsympathetic teenagers but this collective in their 20s don’t seem to deserve this. It’s not even for the brutality that is insulting but how the killer goes about his murder, using acquired social media as if a flash before the eyes before delivering the vicious blow. It’s not enough that the killer targets these people; he also has to attack their paralyzed parents as well. Even for a slasher picture, this seems a little low.

For all the swirling of tech-themed horror and games, Dark Web comes up far too short, having too much of a ball playing with the culture of online assembly to tell anything meaningful, the ending coming off as a shrug and excuse. And for how reality-based this whole production pretends to be, moments such as a goofy voice changer had me laughing at moments not intended for comedy. Seriously, if you’re trying to hide your voice and make it spooky, don’t try to do the whole deep-voiced Jigsaw killer bit. It comes off way too silly in a subgenre that is already known for its absurdity.