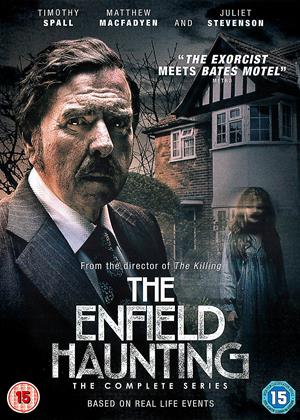 Reviews (1) of The Enfield Haunting

Apparently most people find this mini-series terrifying. Speaking as someone who was decidedly underwhelmed by "The Blair Witch Project" and completely baffled by the success of "Paranormal Activity", I wasn't very impressed by this either. But being a bit blah and slow-moving I can forgive. What I find unforgivable is the attempt to make this dreck more frightening (which seems to have succeeded with most of its intended audience) by pretending this nonsense actually happened.

Yeah, well, technically I suppose it sort of did, in the same way that "Forbidden Planet" is based on "The Tempest" by William Shakespeare, only quite a bit less so, since at least both of the latter admit they're works of fiction. Almost everyone in the tale is named after and to some extent based on a real person, though since these events took place in 1977, most of the adults involved are now deceased, and it appears that none of the children had any input. However, the screenplay was co-written by one of two main investigators. the 80-year-old Guy Playfair, portrayed onscreen as a sort of ghost-hunting Alan Partridge, except that we're supposed to like him. Well, since the man himself helped to write the character, I assume we are; I honestly couldn't be sure. By the way, he's also written numerous totally uncritical books about poltergeists, mediums, reincarnation, and the undeniable fact that Uri Geller really can bend spoons with his brain.

Where it falls down is in grossly distorting real events in such a way as to spuriously add weight to a very thin story while shoving idiotic belief-systems down the viewer's throat. Episode 1 is actually a fairly faithful depiction of what really went on. That's why very little indeed happens for most of episode 1. The remaining two-thirds ramp up the supernatural action (though not enough to increase the pace beyond sluggish) while deviating more and more from the real events it supposedly portrays, and of course throwing in cliché after cliché from every haunted house or possessed child movie you can think of.

Timothy Spall seems like a nice guy, but he's not an actor with a vast range, and here, his trademark screen persona often comes across as a bit simple-minded. Child actors are a very mixed bag indeed, but we have here a young lady in the other pivotal rôle who definitely has a career ahead of her in better material than this, and good luck to her because she's by far the best thing in it. And that's about it. If you accept that this is 90% fiction (and there's plenty of online material including youtube clips of the actual people involved to help you make your mind up), it's a slow-moving and rather silly ghost story owing a great deal to numerous other films, a few of which were actually worse. If, on the other hand, you honestly think that this is a documentary, you'll no doubt find it absolutely terrifying. Alas, that's because you have the IQ of a tree stump.

If you want both a vastly more entertaining Halloween movie and a (mostly) more accurate representation of what really went on in Enfield in 1977, rent the BBC's notorious 1992 spoof "Ghostwatch". It's much, much better in almost every way, and if you don't like it, at least it doesn't force-feed you New Age idiocy, and it's only two-thirds as long.