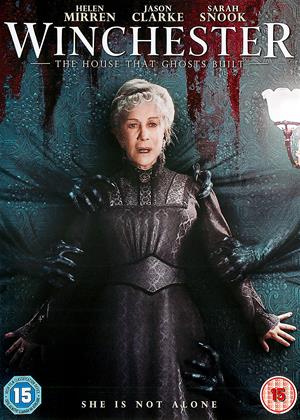 I am a very big fan of low budget horror films. The limitations foisted on a tiny budgeted project often give it an intimacy and requirement to focus on characters vastly outweighs any constraints caused by lack of spectacle. And yet it is undeniably pleasurable once in a while to enter into a full-blown, richly visual, production that few million quid can bring, as opposed to a few thousand.

Jason Clarke as Dr Henry Price, Helen Mirren as Sarah Winchester, Sarah Snook (who was so good as the title character in 2014’s ‘Jessabelle’) as Marion Marriot and Finn Scicluna-O'Prey as Henry Marriot. Terrific performances from the these main players, and Henry is a very convincing ‘possessed child’, even though we don’t get to know the character beforehand and therefore cannot truly embrace the transition.

Against that, we get standard scowling zombie-types, disappointing CGI cartoons and an early over-reliance on jump/shock moments in place of the atmospheric horror ‘Winchester’ seemed to promise. Equally, the dénouement is lacklustre. A kind of horror story standardised by a Disney-filter. The casting is, I think, what saves this – and there are some nice, sweeping directorial touches from The Spierig Brothers that time, money and a measure of innovation can bring.

I’m not using this review as an excuse to extoll the virtues of low-budget cinema. I enter into these horror films with an open mind and a real willingness to enjoy them. And while this is good, it is far from great. It smacks of ‘chills for the masses’, with no real urge to repulse, shock or unduly frighten the widest possible demographic.

This film has got to be one of the best i have seen in a long time, it has a good storyline and does have a few good parts that will make you jump especially with the full surround set up, Its one of those films that once you start to watch you simply cannot leave until the end and i shall certainly be going back to watch again, Too many films these days concentrate on gore and over the top visual sickening effects so it was nice to go back to what i call a traditional horror / suspence thriller and the cast were brilliant especially Helen Mirren who i thought was simply perfect for the part

This is not a low budget horror movie - it would have cost millions. Yet it's just an old haunted house story, with VERY predictable jumps and scares - and twists I would see coming a mile off.

A supposedly moral plot sort of makes sense esp with the subplot - but it all feels as fake and fantasy fiction as Harry Potter.

Predictable slave appearances; and some hokum re 13 nails... and a predictable non-ending leading the way to a sequel which I am sure will never be made.

Not the most originally themed story line but given some piquancy by being vaguely related to a true story. Helen Mirren once again showing what a versatile actor she is. Don't expect too much and you'll enjoy it!.

Sorry not for me a awful film .... i just didn't find it believable i also got bored with it . Shame because it was based on a interesting true story which they should of kept to .. Not me i'm afraid . Hope Helen Mirren finds a better film next time .. She was utterly unconvincing !

Vaguely based on the True story of the Winchester Family and the Continual Building of an eccentric House .

Not a Bad Ghost Story Movie, some scary -ish moments .My only real peeve was i felt Everyone had been Badly Miscast in this Movie.

Helen Mirren is the lynch pin and the Best in the movie but even she feels Wrong for the part with a very fake American Accent. maybe Cathy Bates would have been a wiser choice ?

Anyway, apart from the uncomfortable Casting it isnt a Bad Scary Movie. Fairly good quality effects ,almost like an INSIDIOUS movie but based in Victorian times. well worth a few watches .

While most placid poltergeist pictures based on haunted houses tend to have a shlocky nature that makes you question if the horror was humor, I find myself asking that question the hardest with Winchester. Here is a film the earnestly tries to spin a ghost tale featuring roller skate accidents and climaxes with possessed rifles floating in the air. Was it a comedy? If it was, it needs to go further.

Set in the San Jose mansion before the Great Earthquake of 1906, psychiatrist Eric Price (Jason Clarke) has come to investigate and gauge the sanity of Sarah Winchester (Helen Mirren). She’s heiress to the Winchester rifle company but there’s a questioning if she’s still well enough to maintain that title. Eric may not be the best judge given his drug addiction but it’ll make for some questioning hallucinations later. Something spooky is going on inside the mansion and it’s too bizarre to be all that scary. Most of the scariness involves the possession of a little boy who will flash glass eyes, launch himself out a window, branish a pitchfork as a weapon, and wield a rifle at old the Winchester elder.

All the familiar cheap and cash-grabbing filmmaking tricks of a quick horror production are present. Queue the laziest of jump scares meant to make us scared when we’re more just startled and annoyed, as though the film is trying to give us a mild shock to keep us awake. I suppose I should be frightened that a little boy with a bag on his head is shooting at an old woman but there’s just something so bombastically bizarre about the sight that I couldn’t help but laugh.

The story is nothing that hasn’t been seen before in tales of the supernatural. Eric doesn’t believe in ghosts but maybe he will once he starts seeing his dead wife hanging around the mansion. Sarah does believe in the spirits but isn’t prepared to face them. Not when they’re armed with guns! Somehow the solution turns into stocking the mansion up with even more guns, mostly so we can witness the absolutely hilarious sight of dozens of Winchester rifles floating in the air and choosing targets.

The performances are fine for this type of production. Clarke gives a standardly subtle role, making sure he never winks at the camera with all this lunacy, maintaining the stance of a man dedicated to his craft and driven mad by the life he once had. Mirren turns in a solid performance almost as if her main purpose was to baffle the audience that she’d appear in such a low-rent horror flick. And although the kid of the picture forced into cursed stances, he has a certain dignity for how he is treated as a mere vessel for hauntings, both from the spirits and the filmmakers.

Winchester is by no means a good film but dips so quickly into goofy territory in bounces up from the abyss of bad. It doesn’t quite go the extra mile to be an over-the-top horror movie that is so bad it’s good but it certainly comes close. I just wish it had enough faith to switch off the safety and turn into more of a quirky haunted house picture rather than coming off like a laughable attempt to gussy up the Winchester estate for the tourists.