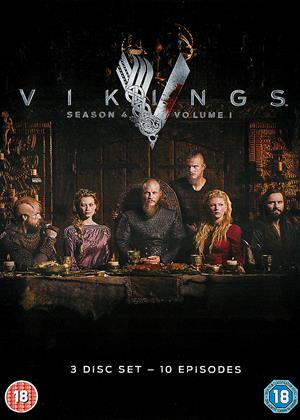 OK so some of this series is very silly - all the women with long luscious hair and make-up who fight in battles and beat professional male soldiers by the score (no doubt because the Vikings had such 'strong independent women' lol).

But it does what it says on the tin. LOADS of tribal/clan infighting; lots of violence and battles; some mystical guff and talk of gods incl a clash between Norse ones and Christianity. But it also travels - to Britain to start with - now Wessex and Mercia; also Paris, which is a true even in the 9th century. Two Viking attacks on Paris in the 840s and 890s, I think.

Some characters here are real. King Alfred (here a child visiting Rome on pilgrimage which actually did happen) united England really (he died in 900 and a statue in Winchester), or at least his son did. The writer/s weave this into the plot. Rollo was also in charge of Paris.

There is a tantalising mention of the Mediterrranean here - they found a map on the Paris raid in the last series - so I suppose that's the next adventure.

Ragnar Lothbrock struggles here, hynotised by a Chinese slave really, with an addiction theme raising its head BUT it is all about leadership, raids and getting wealth, as ever with the Vikings.

An interesting series and way better than the absurd Britannia.