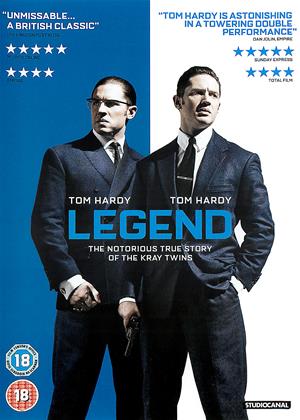 The thing everyone talks about concerning this movie is Tom Hardy's extraordinary performance as both Kray twins, which frequently means that he has to interact with or even fight with himself. While it's certainly true that he does a remarkable job of making two men with identical facial features appear extremely different, his portrayal of Ronnie Kray (the mad one with the glasses) suffers from the same ironic problem as Philip Seymour Hoffman's depiction of Truman Capote. Ron may in reality have sounded as though he was slightly mentally retarded and had a permanent cold, but accurately portraying him on screen makes him come across as such a ridiculous caricature that it looks like bad acting, inappropriate comedy, or both. I sometimes laughed when I wasn't supposed to because his foul-mouthed tirades combined with utterly irrational word-salad sounded like an out-take from Derek and Clive (he even starts talking about "the horn" at one point). And it's impossible not to think of Monty Python's Doug and Dinsdale Piranha when a statement about Ronnie being a bit out of control is accompanied by a shot of him walking into a night-club accompanied by a donkey wearing a dinner-jacket!

Another problem is that this film is trying very hard indeed, right down to copying specific scenes, to be a British "Goodfellas", therefore Reggie Kray's wife becomes the third major character - in fact, the only other character who really matters - right down to narrating the entire film. Unfortunately, Emily Browning gives a very lackluster performance indeed, her narration in particular being painfully wooden. Though to be fair, it must be hard to bring much conviction to dialogue as abysmal as: "We honeymooned in Greece. The Parthenon had stood for 2,400 years. Reggie's promise to go straight lasted two weeks." That's not scriptwriting, that's just word association!

Too many characters who ought to be interesting badly underdeveloped so that we can concentrate on Tom Hardy's one-man show, which gets a bit predictable with its constant emphasis on the "good" brother being held back from reforming by his loyalty to his psychopathic twin, and what shocking twists there are come too late and are clumsily handled. Also, we're shown surprisingly little evidence, other than the two murders that finally send the brothers to jail for life, that they're running an ultra-violent criminal empire. Mostly everyone just hangs around in pubs and clubs talking tough and hoping Ron doesn't have one of his funny turns.

Tom Hardy's very impressive and everything looks terribly authentic, so on a technical level it works, but it's oddly unsatisfying, and sometimes even a bit dull. "The Krays" from 1990 remains a far better depiction of the same people and events. By the way, whose brilliant idea was it to give this film the same name as a dreadful Ridley Scott fantasy starring Tom Cruise as an elf who likes unicorns? There must be a few people who ended up with the wrong DVD and couldn't believe what they were seeing!

I really enjoyed this film about the Kray brothers. Thought the acting was very good from Tom Hardy playing both parts. It gives you a real insight into the corruption and thinking you are powerful enough to get away with anything you want. Eventually you get brought down. I agree it's a strange title for the film and should of been something better.

Really, really enjoyed this film about the Krays.

Hardy is phenomenal as both the twins. Thoroughly convincing as the two very different personalities of the identical twins.

I particularly liked the humorous side to the movie, and laughed out loud at many parts of the film. The humour and the laughs that Hardy provides as both the twins, in their different ways, makes it all the more realistic when they turn on the violence.

Emily Mortimer is great as the love of Reggie's life, Francis, played as a naive and fragile young lady. Strong cameo by Tara Fitzgerald as Francis's mother too, against her daughters relationship with the gangster.

In two days I watched it twice, liking it even more the second viewing, as I appreciated Hardy's extraordinary acting nuances even more.

Tom Hardy at his best - Legend review by MH

This is an extraordinary film. It's a love story at heart both between Reggie and his wife and the love between him and his brother Ronnie. The chemistry between this threesome is palpable. It made me want to find out more and of course when you discover the truth, it isn't quite what is portrayed in the movie. But, even so there are elements of the truth here which are worth exploring. I thought though the Kemp movie was good, this is much more visceral and probably nearer the truth. You find yourself routing for Reggie but the dark side surfaces late in the mood and brings you back to reality. I will probably watch this movie again.

Another version - Legend review by NC

Hardy does well, so has to be a 3 star, if not for that would have been 2. Slightly TV style format. Not as entertaining as Hoskins in Long Good Friday, or as disturbing as Burton in Villain...........the first proper nasty criminal.

If it is supposed to be documentary, neither character is very near the mark, and certainly not the Richardson. I was around at the time and got my MG spares from the Richardson's car-breakers-front. Most of the time they were quite normal, the violent aspect was pretty much internal, with other criminal types. Out and about they were well dressed and well behaved!

Nothing new to learn here - Legend review by Mart

This was a disappointing depiction of the Kray twins. I expected to learn something new about how they came to be who they were but instead sat through a dismal two hours of violence for violence sake. We all know about their reign of terror and violence so why make a film purely to repeat what we already know? Yes Tom Hardy's acting isn't in question but the narrative was irritating and painted yet another sad picture of a female lead sinking without trace. Honestly one of the worst scripted films I have seen in a long time. Poor.

Tom Hardy is gorgeous and a pleasure to watch, his acting skills are very good, and so is the story line, what more do you need to know.

Top movie, loved it! A must see movie!