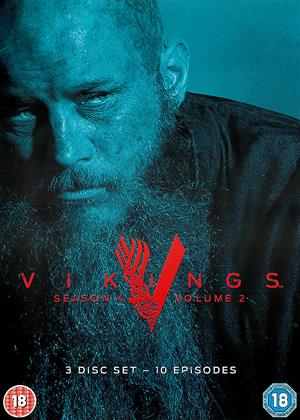 EXCELLENT SERIES THATS REALLY EVOLVED,INTRICATE TALE ,HAS ITS MOVED ON STILL OLD FAVORITES IN IT BUT NOW CONCENTRATES ON GROWN UP CHILDREN OF RAGNOR LOTHBROKE. LOTS TWISTS,LOVE SADNESS,VIOLENCE.WELL WORTH SEEING CANT WAIT FOR SERIES 5

Viking Saga Which Pushes the PC #MeToo Boats Out and Then Some... - Vikings: Series 4: Part 2 review by PV

I enjoyed this though I probably enjoyed earlier series more. The pc gets greater as the series progresses - absurd female characters which say a great deal about the gender politics of now, not then. Pure femi-fantasy. Seeing female Viking warriors fighting in battles and killing 20 men is pure femi-fantasy, as is women leading and ordering their husbands (often kings) around.

Anyway, this series skips forward a few years and shows a ravaged RAGNAR crumbling as we see England again (though Wessex is in the West Country so NOT on England's east coast facing Norway - these boats would have had to go south through the English Channel then bear west to come ashore anywhere near Wessex; Northumbria is by contrast just over the sea from Norway). BUT then many places and towns in the west of England and Wales have names from the Norse Viking language.

His sons are grown (but why are their teeth so whitened and complete?) and plenty of potential there for conflict later, and the Mediterranean adventure should be fascinating. I hope it's not all too woke. I shudder to think what the BBC would have done with a Viking story - probably made it as 'diverse' and dreadful as Dr Who. I enjoy the lack of diversity in this and put up with all the silly tales of Viking queens - all amazingly good looking with long golden hair (yeah right).

I very much like the historical accuracy - there was a famous French king called ROLLO at this time (and William the Conquerer of 1066 fame was the grandson of Vikings who defeated and oppressed the French peasants, NORMANS are names after these NORTHMEN).

And of course there is Alfred, son of Athalstan the spared priest from Lindisfarne - all codswallop BUT of course, Alfred the Great (and his son) DID unite England. Visit Winchester to see his statue - that was the capital of Wessex. He died in 900 AD to the dates are correct.

Good fun epic,. so long as you do not see it as factual history, though it takes from that and adds the fantasy of our modern attitudes.