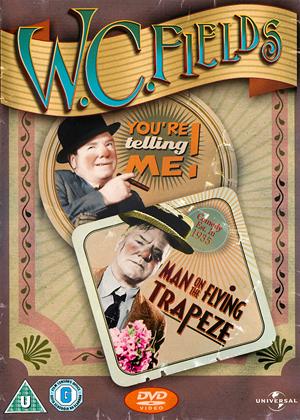 Synopsis:
You’re Telling Me!
Sam Bisbee unwittingly ruins the romance between his daughter and a local society boy. When disaster befalls the demonstration of his new puncture-proof tyre, Sam takes the train home and meets the visiting Princess Lescaboura. She calls at his home town and announces hem as a hero. Bisbee is transformed into a leading citizen.
Man On The Flying Trapeze
Ambrose Wolfinger lives with his wife, stepson, mother-in-low and the daughter from his first, happier marriage. He takes his first afternoon off work in twenty-five years to attend a wrestling match, on the bogus pretext that his mother-in-law has died. Floral tributes arrive at the horse and Ambrose is falsely accused of a drunken spree with his secretary. He is fired but reinstated – on more favourable terms – when his memory for clients’ details is recognized.
Actors:
W.C. Fields, Joan Marsh, Buster Crabbe, Adrienne Ames, Louise Carter
Directors:
Erle C. Kenton
Studio:
Universal Pictures
Genres:
Classics, Comedy

Rent other films like W.C. Fields: You're Telling Me! / Man on the Flying Trapeze

Sign up
In the Foreign Legion / Meet the Keystone Cops

Reviews (1) of W.C. Fields: You're Telling Me! / Man on the Flying Trapeze

After It's a Gift the previous year, Kathleen Howard reprises her role as WC Fields' wife, but it is instructive that the great comic star has a rather more loving daughter (Mary Brian) this time around to sweeten the dish. It's a Gift was very funny, but awfully cold. Again there is a collection of sketches built around a loose narrative. Ambrose Wolfinger just wants to go to the wrestling...

And of course, fate must decide otherwise. This is a fabulously funny film. My favourite episode is the opener when Fields is forced down into the cellar by his wife to confront two burglars who have discovered Wolfinger's applejack and are getting mellowly drunk, softly harmonising an Irish ballad. Fields joins them badly singing along, and then a policeman. Drinking applejack. There is a sense in this scene that domestic life is so unforgiving for all these men that they seize some solace whenever the moment presents, whether confronting burglars, or even having broken into a house. Fields ends up in jail for distilling alcohol without a license.

All the episodes of the film are hilarious, mainly because Fields is so great, his suffering revealed by doing so little, just a sudden nervous movement or a mumbled aside disclosing how he now accepts without dispute that his destiny is inevitably unjust and there's nothing he can do about it.

The particular torture of Fields' existence is that he is always doing what people ask, however absurd, and then is admonished by them when that action proves to be flawed. He does what he's told without demur or hope and gets nailed for it. And who doesn't know how that feels?! This is my pick as his best film.