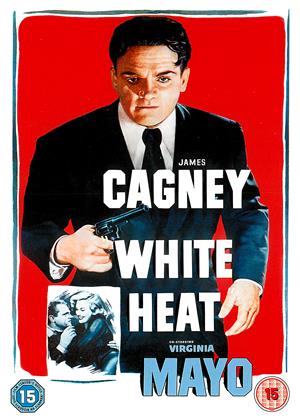 In 1949, Cagney returned to Warners, home of his thirties gangster films, for an update which has become a genre classic. He plays Cody Jarrett, a crazy, mother-fixated killer, like he is one of the most-wanted of the depression era. This creates a tension between this obsolete outlaw and the modern scientific police methods employed to track him down.

This is primarily a gangster film. When Jarrett wants to break out of jail, he doesn't have a hidden map of the building and a plan; he busts out with a gun and improvises. But it is shot through a film noir lens. At times, like when Jarrett comes after Big Ed (Steve Cochran) and unfaithful, degenerate moll Verna (Virginia Mayo), it looks as noir as The Big Sleep.

The characterisations are deeper than in the thirties gangster films, and the cops are smarter. It is a genre landmark, marrying the punchy gangbuster pacing of the thirties mob film with the darker introspection of the post war film noir.

White Heat is as tense and exciting as a thriller. FBI man Hank Fallon (Edmond O'Brien) goes undercover with the most volatile criminal in film history, to plan a heist in an oil depot. The incendiary ending when Cagney literally (and otherwise) burns up the set is legendary. The cast excels, but it's Cagney's film. He's phenomenal.