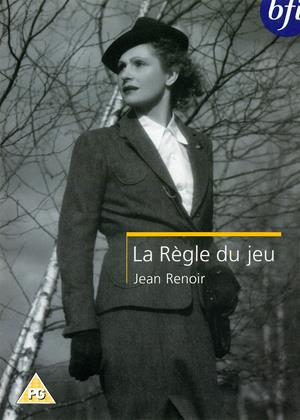 Cinemadiso's 1930s in Films Vol. 1
19 films by cinemadiso
tezza's Rented
156 films by tezza
Frankie's 1001 Movies You Must See Before You Die
982 films by frankie
HumilityPrim's Rented
382 films by humilityprim

Reviews (4) of The Rules of the Game

I think the 2 above (or below!) were taking things a bit too seriously, or maybe they just aren’t used to this style, I’m not sure, if you think about it this is a very good film with lots of witty dialogue, maybe it’s because I’ve seen many worse films but this is certainly a very memorable film with lots of great dialogue, sure the black and white quality isn’t the best but it doesn’t need to be, also I think the scenes work perfectly together, and there’s a lot of great acting here mainly by Marcel Diallo, but also the gentleman who plays Marceau as well and the sergeant looking type. It’s very French style of humour, very dramatic, a man is in love with another mans wife, a fight breaks out, someone fires a revolver, more arguing ensues, then it turns out the wife has infact ran off with another man, there are some really strong messages here, I particulary liked the quote ‘I don’t love you anymore, I have great affection’ there’s just many great moments in this film that would certainly make it rewatchable, like I said there’s many strong messages and the combination of great acting, great witty dialogue, useful messages make it a classic French film.

More than a game. - The Rules of the Game review by RhysH

How can a film so hated by critics at the time become nearly eighty years later praised as one of the great films in the history of cinema? Certainly the depiction of the French upper class and their moral callousness would not have been endearing to the ruling class and indeed the film was banned because of the effect it might have on the morals of the young. Renoir wrote that, "During the shooting of the film I was torn between my desire to make a comedy of it and the wish to tell a tragic story." A year after the film's release the Germans marched into Paris.

The acting is often too studied, the realisation at times farcical but beneath the frivolous surface is, in retrospect, our knowledge that these characters are about to be pawns in the rules of the game of war. Renoir wrote, "it is a war film and yet there is no reference to the war. Beneath its seemingly innocuous appearance the story attacks the very structure of our society."

For me the best performance is by the director himself, Jean Renoir plays Octave with a wonderful mix of comedy and Pathos.

The cinematography is wonderful a true masterclass in effective use of a camera.

Renoir was so concerned about the reception of the film that he "resolved either to give up the cinema or leave France".

French Farce - The Rules of the Game review by AM

Really didn't enjoy this film. I only got it because the reviews had been good which I really don't understand! A sort of French farce, very manic, lots of infidelity...it's quite hard to keep up with all the shenanigans!

I think it must have aged pretty poorly because it was a bit like a French Carry On movie in my opinion. The character played by director Jean Renoir I found to be particularly implausible and annoying. And some of the eyebrows were the worst I've seen in any film!

In summary a good film if you like weak French comedies with lots of painted eyebrows.