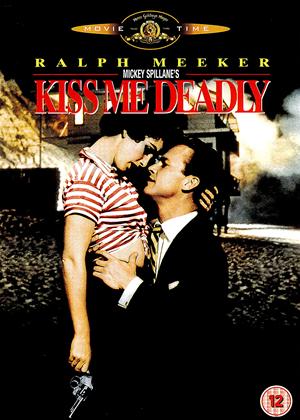 Reviews (3) of Kiss Me Deadly

What's in the box? This low budget thriller from Aldrich will have you guessing until the closing scenes (thankfully intact on this DVD). A classic piece of film noir in gritty B&W its a shame this DVD doesn't come with any extras. The main feature is pacey, helped along by quick editing and some unusual, distinctive camera angles. It's easy to see why many highlight its influential status. Very much a product of 50's America. The undertones are apparent, the performances over the top with dubious sound quality at times, but its all part of Kiss Me Deadly's charm.

As crime films were becoming more realistic, Aldrich made one of the most expressionistic and visually creative film noirs of the whole cycle. Kiss Me Deadly is an artistic knockout and it pushes at the boundaries of what a film could show, with the explicit violence and its antihero PI Mike Hammer who isn't as much ambiguous as utterly unscrupulous.

Kiss Me Deadly begins with a flourish. Hammer runs into a woman (Cloris Leachman) who has escaped from being tortured, and is barefoot on the freeway in only a trenchcoat. Hammer investigates her eventual death, not because he cares about the law, or her, but because he thinks there will be more money than his usual divorce racket.

Aldrich's Mike Hammer is fascinating. To a degree he recalls the unpredictability and ethical relativity of Sam Spade, but is much more mercenary. He is a philistine: narcissistic, sadistic and manipulative. It's a brilliant performance from Ralph Meeker which he would never equal.

Everyone is motivated by greed, and that greed justifies any possible means. When the stupid protagonists stumble on the 'great whatsit', without knowing what it is, it kills them and everyone else.  The motifs and themes of film noir have been reimagined and updated and there is a palpable sense of the dogs of censorship being called off.

Mickey Spillane's once-popular ultra-violent private eye Mike Hammer didn't make it onto the big screen anything like as often as the creations of Raymond Chandler and Dashiell Hammett, because he was simply too nasty to be acceptable as any kind of hero. Robert Aldrich, the man who gave the world "The Dirty Dozen" and helped invent the spaghetti western, always had a way with extremely violent and not very pleasant "heroes", plus a gift for intelligently subversive irony completely lacking in the the original Mike Hammer novels, so he was the ideal director to bring the character to life. And Ralph Meeker is absolutely perfect as a borderline psychopath whose finest quality is a crude loyalty to his few friends that would just about qualify as a redeeming feature in an alpha male chimpanzee. I guarantee you won't like this guy on any level for one second, but you'll still care what happens to him. That's good acting, good directing, and good movie-making all round.

In a crucial change from the source novel, Hammer is, for purely selfish reasons, on the trail of the ultimate McGuffin, a "great whatsit" he knows nothing about except that people are willing to kill lots of other people to get it, therefore it must be immensely valuable. In the book, it's a suitcase full of heroin, and Hammer knows that all along. In the movie, it's something altogether different (and much more interesting), and when Hammer finally figures out what it is, he's not so sure he wants it after all. But by then, everything's out of control. Another change from the source material is that the police, instead of being in awe of this man who can do their job so much better than they can (usually by slaughtering all the bad guys), despise him as a sleazy thug who treats the woman who loves him no better than a pimp, and literally ask for a window to be opened when they have to be around him.

Mike Hammer, as portrayed here, is the toughest tough guy of them all. No wisecracks, just relentless brutality; he metes out the same level of nastiness to a corrupt official who disgusts him by demanding a bribe, and an honest man who annoys him by refusing one. If you include everything that's implied but kept just off screen so the censor will let it pass, this is a staggeringly violent film, and none of it is the slightest bit glamorous. However, your attention never wanders, and almost everyone who's onscreen for more than a few seconds instantly springs to life as a fascinatingly twisted character in a dark, sleazy world you're constantly intrigued by (watch out for spaghetti western regular Jack Elam playing another kind of villain while waiting for spaghetti westerns to be invented). If you like film noir, this is probably the ultimate example of the genre. And you simply won't believe that ending!