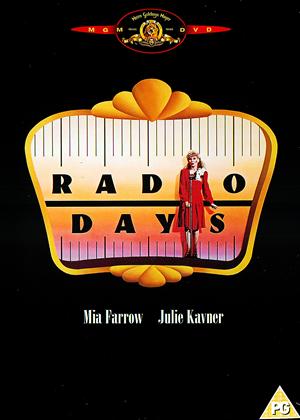 Radio Days has received considerable critical and popular acclaim and Woody's script was yet again nominated for an Oscar. It is a nostalgic reflection on New York, and Brooklyn in particular, in the late thirties and extending into the early forties as the US joined WWII. Hard to imagine this wasn't Woody's personal response to Fellini's Amarcord.

It focuses on an extended family which Allen has described as a cartoonish version of his own, including a creditable performance by Seth Green as the latest red haired child actor to play the director as a boy. It reflects on their relationship with the golden age of radio, its stars and the popular music of the period.

I don't feel its magic as strongly as many. It provokes a smile rather than a laugh, and the reminiscences are familiar (though exaggerated) because they are based on well known radio events, like the panic caused by Welles' famous broadcast of the War of the Worlds, or the coverage of the midwestern child trapped down a well.

But there is still plenty to enjoy. The recreation of thirties Brooklyn is convincing, the music is wonderful and it's great to see Diane Keaton and Tony Roberts back in cameos. The dynamic of the family, and the love within it, is palpable. There is a persistent ache of the the passing of the years, and of the living memories of an era about to be consumed by the tide of time, and this gives the film ultimately a pleasing undertow of melancholy.