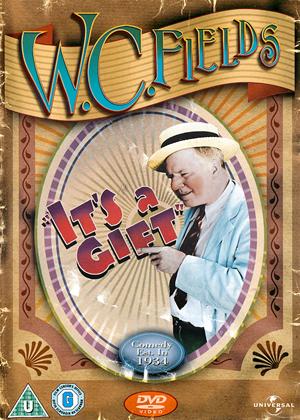 Synopsis:
Fields plays small-town grocer Harold Bissonette – Pronounced ‘Bee-son-ay’ by his wife – who puts up with difficult customers and annoying neighbours. Bissonette has ambitions to own a California orange grove and, aided by an inheritance – and from selling his business – acquires what, on their arrival, turns out to be a worthless shack set in scrubland. Her suspicions confirmed, Mrs.. Bissonette begins to leave with their children but the land turns old to be more valuable than it looks…
Actors:
W.C. Fields, Kathleen Howard, Jean Rouverol, Julian Madison, Tommy Bupp
Directors:
Norman Z. McLeod
Studio:
Universal Pictures
Genres:
Classics

Rent other films like W.C. Fields: It's a Gift

Sign up
Laurel and Hardy: Sons of the Desert

Still entertaining - W.C. Fields: It's a Gift review by MT

In my opinion W C Fields has aged better than Chaplin, Laurel and Hardy, Harold Lloyd and possibly even the Marx Bros. This is still an entertaining watch, with great sight gags and physical humour as well as decent characterisation, jokes and a surprisingly coherent plot.

The older I get, the better this seems. - W.C. Fields: It's a Gift review by Steve Mason

The prolific Fields used his feature films to upload favourite sketches from his stage acts and shorts onto that format. So they are inevitably episodic. If It's a Gift feels like his first masterpiece it's probably because his tragicomical persona really crystallises so brilliantly. Fields emerges as a timeless, suffering everyman whose desires must always be thwarted. He only wants to go to California to run an orange grove...

He pays the typical comedian's attention to costuming with the cigar, white flannel suit and boater, the ruined nose. Fields' schtick is of a middle aged man whose wife has become quite alien to him, his connection to her hard to fathom. He has become aware that he is rather too old for the way society has changed. His coping mechanisms have left him weary, and unlikely ever to realise any of his remaining potential. He has a residual, effortful charm, that is evident to the generous, but looks grotesque to the younger and more successful. Nervous, traumatised by domesticity, he remains more gentle than the age he has survived to live in.

This has one of Field's better scripts. The opening episode is the funniest with our hero's grocery store wrecked by the blind and deaf Mr. Muggles, who after visiting havoc among the glassware, hilariously crosses the busy road outside without a scratch among the speeding cars. Such are the laws of the Fieldsian universe.

Fields can see every disaster as it approaches, but is powerless to vacate its path. All he can do is palliate with whisky and cigars. There's a saying in comedy that you put your protagonist in the last place he wants to be, which is exactly where the immortal Fields' character can always be found.