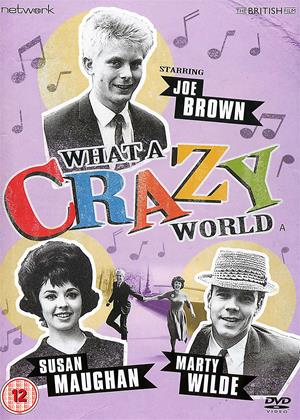 Reviews (1) of What a Crazy World

“The closest you've ever come to a bird is a boiled egg.” Such is the banter in one of the many coffee bars and cafés frequented by Joe Brown and Marty Wilde in What a Crazy World (1963). One such bird is Susan Maugham, Brown's on-off girlfriend, the off segments caused by his embarrassing lack of funds, a situation compounded by his inability/reluctance to find a job.

All of which brings frequent dinner-table, plate-wiping monologues by his father, Harry H. Corbett (Steptoe's son) a dog-racing working man who is bringing up three children in a sharply-detailed tenement block, the flats reached by an outdoor corridor with a view of the bombed-out land south of the Thames. The film derives from a musical by Alan Klein, who also appears as one of Wilde's gang, a posse not exactly from West Side Story but startling indeed with their first number, “The Layabouts' Lament”. This is surely unique for taking place in a Labour Exchange and, what's more, now likely to raise other eyebrows than those of the hapless man (Michael Ripper) behind the counter: in the queue are immigrants dressed in costumes from their various countries to which the tune plays homage with such things as a calypso turn.

It is only some way into the film that one finds Brown is an aspirant songwriter as he tries out the title song in the safety of his bedroom - on a banjo. Meanwhile, he and Wilde have found enough spare change to go to what is promised to be a great group at a club. This turns out to be a British Legion hall, and the entertainment is provided by Freddie and the Dreamers (he of those extraordinary spectacles favoured by potential murderers holed up in boarding houses). One of their songs is a version of “Short Shorts”, amidst the singing of which Freddie divests himself to reveal more pairs of striped baggy underwear than Benny Hill can have ever dreamed of. As if that were not enough, Freddie then turns to a song “Sally Ann” which has all the group dressed in Salvation Army hats.

Well, Guys and Dolls this is not. There is, though, a suggestion of Brecht refracted though Robert Bolt's A Man for All Seasons. Lo and behold, the hapless man in charge of the Legion hall where a fight breaks out is the same one who was behind the counter down the Labour, and also, amongst much else, pouring the tea in the café while Susan Maugham sings one of her laments. He is indeed billed as The Common Man. And it is extraordinary to think that he did not change his surname from Ripper (though perhaps it helped to get him work at Hammer).

By the time that this was released in December 1963, the pop world had changed. “I Want to Hold Your Hand” was Number One, with “She Loves You” duly returning there. That said, What a Crazy World is a notch or more above those films which had bundled singers into a scant plot in order to belt out recent hits. Here are real glimpses of kitchen-sink London, with relief provided by bowling alleys and a Bingo Hall (a surreally-dressed figure calling out the numbers) - and a montage of discs in citywide jukeboxes which could have appeared in a German film in the Twenties. And some salty dialogue: “He just grunts and turns over.” “My Bert's the same.” And, in the Legion Hall, a strange way to praise a woman's figure: “Look at that and the price of fish!” And one might reflect that just as Steptoe's son appears here (and, Heaven help us, sings), so Steptoe himself would appear memorably a few months later in A Hard Day's Night.

Best of all, however, is a sequence in which Brown tries to sell his song to music publishers on Denmark Street. Sportingly, several real premises allowed themselves to be filmed - while turning down the proffered ditty, until Brown lands a modest job with an invented one-man outfit and, by some subterfuge, gets the song taken on. The publisher duly exchanges a cigarette for a cigar as the sheet music rolls off the presses alongside copies of New Musical Express proclaiming it a