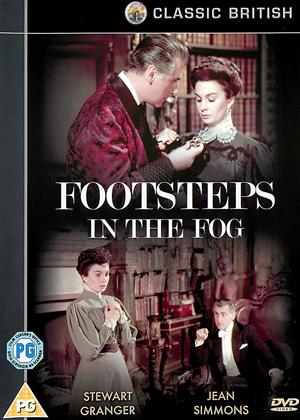 Synopsis:
Stewart Granger and Jean Simmons star in this compelling thriller set in the fog-shrouded streets of Victorian London. As he buries his wife in a rain-soaked London churchyard, Stephen Lowry thinks he has committed the perfect murder. He's wrong. His quick-witted young maid Lily knows that he secretly poisoned his wife - and she has the proof. Now, as the price of her silence, she wants her mistresses' jewels, her mistresses' fine dresses and - most of all - her master himself.
Can Stephen give Lily the love she craves? Can she trust a man who has already murdered once? As Stephen begins to court another woman, the thick London fog suddenly echoes to the cries of 'murder!' Featuring real life husband and wife Stewart Granger and Jean Simmons at the height of their international stardom, 'Footsteps in the Fog' is a first rate murder thriller with shocking twists that will keep you guessing until the very last moments.
Actors:
Stewart Granger, Jean Simmons, Bill Travers, Belinda Lee, Ronald Squire, Finlay Currie, William Hartnell, Frederick Leister, Percy Marmont, Marjorie Rhodes, Peter Bull, Barry Keegan, Sheila Manahan, Norman Macowan, Cameron Hall, Victor Maddern, Peter Williams, Arthur Howard, George Bishop, Mark Daly
Directors:
Arthur Lubin
Producers:
M.J. Frankovich, Maxwell Setton
Writers:
Dorothy Davenport, Lenore J. Coffee
Studio:
Sony
Genres:
British Films, Classics, Drama, Thrillers
Countries:
UK

Reviews (1) of Footsteps in the Fog

Spoilers follow ... - Footsteps in the Fog review by NP

When grief-stricken Stephen Lowry (Stewart Grainger) faces life alone after burying his wife, our heart goes out to him. Rarely has a house looked so sumptuously forlorn and bleak, cold and kissed by the rain’s cold embrace. A theatrical statement it’s true, but fittingly so, because this is an epic matinee from Columbia; a huge, star-stuffed extravaganza. Our sympathy lessens when Lowry (a) kicks his cat and almost as bad, (b) is found to have poisoned his dear departed, causing her demise.

Wily, picked-on maid Lily Watkins (Jean Simmons) uses her knowledge of this to gain career momentum within the house. The inappropriately jovial behaviour of the court where Lowry faces a trial for murder notwithstanding, he and Watkins appear to share a curious connection – she is quite the most sympathetic and appealing blackmailer portrayed in a film, and it is understandable she and Lowry strike up a believable relationship: they have both met their match. The two leads are excellent throughout, with a very subtle ‘knowing’ performance from Grainger; backed up by an excellent cast including Victor Maddern, Bill Travers, Peter Bull and the original Doctor Who, William Hartnell.

A dark-humoured exercise in dealing and double dealing, of macabre machinations and sinister goings-on behind closed doors – and all wrapped up in lavish atmospherics of swirling winds, pea-soupers and other such horror trappings. Rarely have they looked so good.