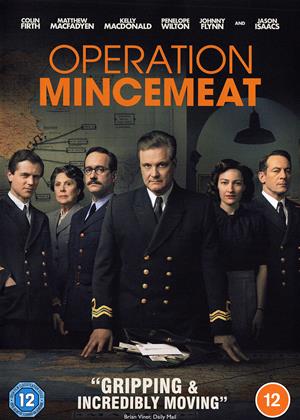 Whilst an interesting story from an historical perspective and despite the all star cast this is an over talky Second World War drama that has that air of Colonel Blimp about it. It seems that the core of the story wasn't enough so it's been puffed out to include love affairs and personal jealousies in side plots that peter out and go nowhere. This is the story of a British covert intelligence operation in 1943 to have the Germans find a dead body that is carrying secret documents alluding to a panned allied invasion of Greece instead of Sicily, which is the real strategy. This is dreamed up by Naval intelligence officer Ewen (Colin Firth), whilst dealing with marital problems, aided by RAF intelligence officer, Charles Cholmondeley (now there's upper class British name for you!) (Matthew Macfadyen). Of course they have trouble getting the higher ups to agree, in the form of a grumpy Admiral (Jason Isaacs) until good ol' Winston (Simon Russell Beale) backs it personally. The tense nature of the plan is told mostly through lots of hand wringing in smoke filled offices while Ewen and Charles moon over their assistant Jean (Kelly Macdonald). This love triangle is distracting and lessens the more interesting story as the discovery of the body by the Spanish doesn't always go to plan. Thes tory has been told before in The Man Who Never Was (1956) and the core of the idea was used in North BY Northwest (1959) but as a modern war story it's a bit of a lame film that fails to lift itself beyond a passing interest.

Too broad and slightly boring - Operation Mincemeat review by AER

Thank goodness it's not quite the Dad's Army / Richard Curtis-goes-to-war film that the trailer tried to sell us. However, as intriguing as this real-life story is it's still fairly standard, very dreary and in the end, not at all interesting. A solid cast go through the motions and fail to sell us the peril and high stakes of their plan. Some aspects felt forced like the presence of Ian Fleming (played by singer Johnny Flynn) and the references to James Bond. On the whole, you are left wondering what a film about the life of Glyndwr (the corpse) would have been like - but much of his involvement is played for fits and giggles in this. Ultimately, it was a little too broad and lacked grit or punch.

Solid old fashioned British War movie based on the real life deception of the film's title.

Its the Spring of 1943 and Churchill has agreed to the invasion of Sicily as the first major target to re-take Europe. Except its such a glaringly obvious target that the German Army will be waiting for them.

A plot is hatched by Motague (Firth) and Cholmondeley (Macfayden) to have a British Marine Officer washed up on the Spanish coast will plans for a full scale invasion of Greece and hope the German's fall for it.

Their superior Godfrey (Issacs) is very sceptical but Churchill gives his approval so a whole fictious backstory is cooked up with history and love letters to convince the Germans that he is real. This involves Jean (Macdonald) who becomes Pam the imaginary girlfriend of the dead body.

He is dumped at sea but things don't go to plan in that they assumed the Spanish would hand over all the documents to the Germans but by a conveluted route the documents are returned to London...

But have the seals been broken and then re-sealed and if so by the Germans? or they unaware of the whole ruse and the invasion is doomed to failure?

Of course we all know how it turned out but the build up and tension are well maintained.

The major drawback is that by playing the parts of the lovers both Firth and MacDonald find they have feelings for each other and this enranges Macfayden who also has feelings for her.

This does take up far too much of the film - ok it can be in there but it really does slow the whole narrative - and there are just too many sub-plots going.

There are some nice touches -one of the team is Ian Fleming (Flynn) with some additions to the deception provided by Q Division and a lot of people seem to writing spy novels and the whole plot becomes a novel in progress.

The Man who Nevere Was - Operation Mincemeat review by CSF

'Operation Mince Meat' is a remake of 'The Man Who Never Was', 1956. I got confused because I thought the old version was to convince Hitler that the D Day was not in Normandy but in Calais. However I prefer the old version. It is more dramatic, more emotional. I found 'Operation MM', a bit cold, somehow mechanical.

In the same type of story, there is a 1994 film called 'Fortitude', telling how British Intelligence sacrificed the life of one of their female spies by giving her a fake secret, arranging her arrestation in France by the Germans, thinking and hoping that she would talk under torture. She didn't. This film by Waris Hussein has vanished! It was a great film. I recommend the book by Larry Collins

Too long too dull - Operation Mincemeat review by cr

I was looking forward to this as i saw the documentary by ben macintyre who has also written a book.

But i agree with the other reviewers this is a fairly thin story stretched over 2 hours. Very interesting as an hours documentary but not as a feature. There is no action or dramatic tension and was all a bit slow. Shame

This film is too long as usual with so many modern movies - and like them, feels it has to invent female characters (all 'strong independent women' who tell men they do not need their help multiple times). This gets SO tiresome and is preachy pc 21st C feminism - NOT how women behaved in 1943.

The scriptwriter (female) obviously feels she has to puff this out to make it all about love affairs and petty jealousies of men, and probably invent female characters who never were too for the sake of pc boxticking. Shame. It spoils the film. Watch the FAR superior THE MAN WHO NEVER WAS (1956), a 5 star film, to see the real story, minus the silly romantic subplots and pc girl power posing.

I was not sure whether to give this 3 or 4 stars. In the end it is 3.5 stars rounded up - because the direction/acting is excellent and I loved the later parts of the film set in Spain (Huelva, now famous for strawberries and heavy industry) which I did not know about. Great to see Churchill given respect too, as is right.

And I can even forgive the in-jokes about 'spooks' - the TV series that starred Matthew Macfadyen.