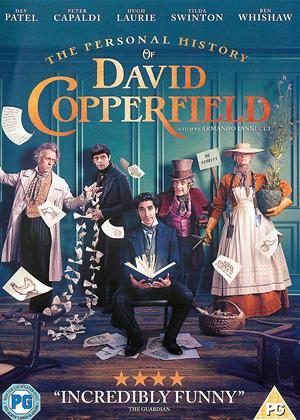 Rent other films like The Personal History of David Copperfield

Reviews (24) of The Personal History of David Copperfield

This film was like a set of little stories strung together, it didn’t flow well and had some particularly bad acting from the supporting actors. Peter Capaldi also looked very out if place as Mr Micawber. The presentation of so many ‘people of colour’ in various roles, belied the writing of Charles Dickens and the times he lived in. I can see director, Armando Iannucci, homed in on the humour of the story, as opposed to the serious side but it really didn’t work.

Maybe if you know the story already it helps. We started watching and really had no idea what was going on. Things moved so fast between scenes with strange relatives and, whoever popping up saying something strange very quickly and leaving. Thank god the DVD seemed to stop half way through, maybe it got fed up as well as us. Tried to watch it with my family as was a PG and marked as being a comedy. I thought if it was a comedy it was supposed to be even remotely amusing.

An almost impossible task to cover David Copperfield in 2 hours, so I can see that shortcuts are needed. Parts of the film work, others clunk a bit. Dev Patel is good in the title role but Copperfield is not the main character in the book, he's the central point around which the other more eccentric characters revolve - seen in different ways (and called different names) by the other characters. Hugh Laurie is very touching as Mr Dick, Tilda Swinton a fearsome donkey bashing Betsy Trotwood. I couldn't decide whether I liked Ben Wishaw's creepy Uriah Heap but I really did not like Peter Capaldi as an accordion playing Mr Micawber. The denouement of the main plot and the unveiling of Heap's villainy is rushed. Why bother with the Yarmouth end of the story if you're going to completely change the outcome? A bit hit and miss.

Dickens would turn in his grave ! - The Personal History of David Copperfield review by JD

If you want to watch a “woke” version of this much loved Charles Dickens classic, this is the movie for you.

If not , you will be shouting at the tv at this unfunny, confusing, strange version. The well known cast are wasted.

Couldn't manage to waste my time watching it all. Think it was supposed to be funny but it didn't work for me.

Cringe worthy. To see so many talented actors over-egging the parts was awful. At times it was so saccharine, the film made one's teeth hurt. There have been great versions of the Dickens masterpiece and this was definitely not one of them. Why add the racial dimensions to Dicken's very personal semi-autobiographical novel? For the sake of political correctness and inclusiveness? In fact, it subtracts and only makes for confusion. Why not put all the characters in wheel chairs or make Clara Peggotty, trans-gender. Truly awful. Watch the excellent earlier versions instead!

I agree with the final paragraphs by the reviewer ‘DS’. A TV Series in 6 one hour episodes would have allowed a more faithful rendition of the novel, but as Armando  wanted to do a film he had to decide on style I guess. What you get is two hours of , mainly manic, fast moving storyline with modern editing against a background of pseudo CGI enhanced Dickensian Britain played by some great household names who put in very good performances. Particularly enjoyed Peter Capaldi as Mr Micawber. Some have commented on the diversity of the acting ensemble. Yes it was weird to square it away to begin with but that didn’t last long. I read that Armando wasn’t making any point, as others have mentioned, but he just thought ‘why not’ and select from 100 pc of the available acting talent.

It is an interesting casting issue and I, for one, salute Armando for going for it big time in this production.

Personally, I loved the 'colour-blind' casting and would like to see more in films. Having said that, I gave up on the film after only watching half; I know the story well but this version was - dare I say it - just boring. Emotionless and flat despite its stellar cast.

Interesting concept of the life DAVID COPPERFIELD from his infancy to success as a writer condensed into a 2 hour film.  The characters are there but they are characterisations as there is not the time to develop them.  The film is exceptionally cast and they give an amazing set of performances within their role confides.

The Personal History of David Copperfield is a fun, feel-good film; the kind of film that lightens the heart and smooths the roughest of days. It’s a riot of colour and eternal optimism, a whimsical delight.

Is it twee? Absolutely.

Is it a tad nauseating at times? Absolutely.

But I didn’t care about that, and I suspect you won’t either.

It’s the story of Dickens’ David Copperfield, told by David Copperfield as a recital in a theatre. An original, if not a slightly peculiar way of presenting a film. But it works, it makes the tale much more personal, and it wraps it up nicely at the end.

For those who don’t know the story, David was born into a rural household consisting of his mother and a maid, Peggotty, a bubbly, blustery, wonder of a woman. David grows to, I would say ten or so , in a bubble of love and apparent security.

However, this is the early Victorian era, and David’s father died before he was born. David’s mother is a woman alone. Recently I reviewed on my blog an excellent book called The Five, by Hallie Rubenhold, which covers, amongst other things, the precariousness of a Victorian woman's life. So, queue the wicked step father and, for good measure, the wicked step-aunt—played bizarrely, as I only watched her on Game of the Thrones the night before, by Gwendoline Christie (Brienne of Tarth).

David is sent away, first to Peggotty’s relatives in Great Yarmouth who live in an upturned boat and then, after his step-father wants rid of him, to lodge with Mr Micawber in London and work in a child labour bottling factory run by, you guessed it, his wicked step-father. The landlord, played by Peter Capaldi, is a jolly ‘something will turn up’ man permanently out of work (although I doubt that he was ever in it). And permanently on the sponge for money.

From there the tale weaves its way through an aunt, then boarding school, then work, then first love, then happy ending.

There are many parts played by some great actors.

For me Tilda Swinton was the best, just. She played David’s aunt, Betsey Trotwood who, for some strange reason, has a thing against donkeys.

Hugh Laurie plays Mr Dick, an extremely confused man who can’t rid himself of the internal monologue of Charles I, the Stuart king that was beheaded by Cromwell, unless he flies a kite. A role he won a BIFA for.

Morfydd Clark, Mina in the BBC Dracula, I thought wonderful as the heart-of-gold natured, but a little soppy Dora, David’s first love. This love provoking a wonderful scene of David seeing all things Dora in all places in London.

And finally, Ben Whishaw (Q, amongst his many other fine roles), as the fawning, slimy, rogue Uriah Heep.

Armando Iannucci and Simon Blackwell were always going to have a task at hand without worrying about what a few dyed-in-the-wool racists think about having a black actor playing a white actor’s mum and that task is the same as anyone who tries to commit well-loved Dickens novel to the cinema. It the fact that the length of a film cannot fit all the nuance and intricacies of most, if not all, of Dickens novels.

So we end up with quick cuts, exclusions and skimming from the original text, so as it ever was.

Iannucci is well known for his scalpel sharp wit and take on both modern and historical politics showing it up for all of its redundancy, pomp and ridiculousness but clearly the modern world and our glorious leaders have made his take on this redundant. So why not to Dickens who stories were equally scapel sharp, astute comments on Victorian Britain?

This take on David Copperfield flows with an eccentric oddball humour from the off and we are swept along with some speed through the title character’s trials and tribulations. Unfortunately this is at the expense of supporting characters so we only get thumbnail sketches of them and it depends on the skill of the actor whether you connect with the person on the screen. Due to some excellent casting and some great locations in general the film gets away with it.

Dev Patel is uniformly excellent in anything he puts his hand to and his kind-hearted and honest David Copperfield is no exception and luckily he is ably supported by Peter Capaldi as an unlikely Mr. Micawber, as optimistic as ever, and a myriad of experienced and talented actors from Hugh Laurie, in a role that seems to have been waiting for Hugh Laurie over the years, Tilda Swinton carrying on her quest to seemingly play only strange and eccentric people, and the aforementioned Rosalind Eleazar as Agnes who captured all attention as soon as he appeared on the screen for me. Ben Whishaw must be mentioned in dispatches as everyone’s favourtie slimey, hang-wringing Uriah Heep, black hat firmly in place but oddly just enough sympathy at the closing stages of the film.

The problem is not in the direction, writing, cinematography, sets or acting but rather the material and after enjoying and watching The Personal History of David Copperfield you feel as if some large part of it was left on the editing floor, it wasn’t it was simply this was story telling pared down to fit in with cinema running times and modern audiences.

As such the film did a good job and all those involved such proud and pleased with their efforts, Unfortunately though, and I say this with a heavy-heart being an admirer of Armando Innaunci, this film proved to me that David Copperfield would be best served with a high value production TV series with enough episodes to do the story justice.

Still fun enough for a Sunday afternoon viewing with all the family.