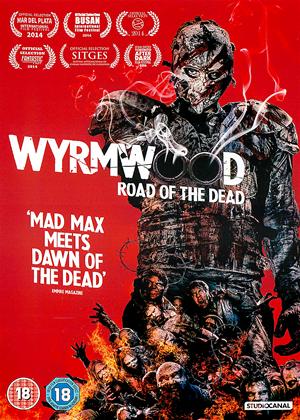 Rent other films like Wyrmwood: Road of the Dead

Reviews (2) of Wyrmwood: Road of the Dead

Spoilers follow ... - Wyrmwood: Road of the Dead review by NP

A group of heavily armoured folk pounce from a vehicle into the path of a group of marauding zombies. The first line of dialogue we hear is, “Come on, you f***ing dummy!” And then, bedlam. A plethora of gunfire, cascading streams of blood, a dash of gore, and many of the walking-dead become quite simply, dead-dead. It isn’t a bad start, and lets you know exactly what film experience you are in for.

Sometimes it’s good to sit back and watch a group of muscle-brained heroes blowing bloody chunks out of a relentless horde of zombies. Except this Australian rollercoaster has an eccentricity that makes it a richer experience than that. There is a thin vein of black humour running through, not entirely unreminiscent of Peter Jackson’s 1992 ‘Braindead’. Here, the grotesque comedy doesn’t get as much of a hold and we are left with a desperate chase through a country suddenly teeming with gas-breathing living cadavers that enjoys moments of madness.

If you are in the mood for this, it delivers in spades. If not, it might come across as a group of characters whose dialogue consists of ‘what the f*** is this,’ and ‘what the f*** is that?’ The occasionally unconventional plot concerns Brooke (Bianca Bradley) who narrowly escapes being devoured by a group of newly formed zombies before being ‘rescued’ by a military group that takes her for experimentation every bit as deadly as her original predicament. Her brother Barry (Jay Gallagher), who has recently ended the lives of his zombie wife and daughter, teams up with a handful of similarly scarred characters, and proceeds to find Brooke and shoot as many marauding, slavering, dead-eyed ‘infected’ as possible.

‘Wyrmwood’ is twisted, fast-moving, brutal, bloody and the effects are very convincing. And it’s an enjoyable rollercoaster.

Wyrmwood ,End Of days - Wyrmwood: Road of the Dead review by porky

Pretty Low Budget ,but rather Good Fun Zombie Outing. A bit like all of 'Z Nation' condensed down to one episode .

ie; Some Comedy, Some Corrupt Government/Army types, Some Zombie Mind Control, Some Half Human /Zombie Hybrid ,and a bit Mad Max in styling .

Watchable and entertaining ,but not the best Low Budget Zombie movie around. But seen Much Worse .

The independent horror scene is hot right now with plenty of young directors providing a fresh approach to the genre. Wyrmwood is another such film with first-time director Kiah Roache-Turner taking an original whack at the ever-popular zombie subgenre. He breathes new life into an overly populated area of horror with surprises, grit, humor and energy. It’s a film that spins a bloody web of ideas that may go overboard the way it keeps adding more as it goes along, but it doesn’t diminish the joy of seeing something new and unique.

The zombie outbreak this time around is airborne, affecting all those with blood types that are not A positive. Those infected become flesh-craving creeps that emit methane. The unexplained disease apparently renders all flammable liquids useless so, naturally, there will be a moment where a car runs on zombie fumes. But, wait, there’s more! There’s a mad scientist doing experiments on human beings by slowly infecting them with his zombie test subjects. Doing so creates a human being that can somehow psychically control zombies with her mind and reflexes.

These two stories are filled with some likable if not predictable archetypes. Our protagonist is the bearded mechanic Barry who becomes emotionally hardened after losing his family to the outbreak. He tries to kill himself, but finds the will to live through survivors and the prospect of finding his sister. The survivors he teams up features a familiar batch of characters: the quick-talking black guy, the mustached gun-runner and a couple of one-notes for zombie fodder. In the B-story with psychic zombie control is Brooke, spending most of the movie with a gag in her mouth as the mad scientist performs his experiments. Once she’s let loose with her newfound powers, however, she gets to play it up just as much as everyone else in the picture.

As with any great horror, Wyrmwood draws its inspiration from the charming greats. There’s an inventiveness to the zombies which echoes shades of Re-Animator and Bad Taste. There’s great care with the camera to make scenes that shine in the tradition of The Evil Dead and Dawn of the Dead. And it just has an overall giddy tone that knows exactly where to have fun with its material and when to be gritty with its violence. It may be having too much fun in the way characters seem to shift to the “hell yeah” well of dialogue abundantly, but it helps that it’s working off a script that feels different.

At a micro-budget of only $160,000, this is one impressive first picture for Kiah Roache-Turner. The man has an eye for shooting scenes of intense action and effective horror. The creativity behind nearly every shot is amazing. There’s some real craft in the assembly as with the “armor” worn by the survivors and the zombie-fueled car they assemble in a garage. Bonnie first encounters the zombies at a horror-themed photoshoot leading to her stylishly-painted subject to attack in chains. And the entire sequence with the mad scientist is wonderfully lit with the right amount of fright and strange.

If the zombie genre appears on its last undead legs, Wyrmwood: Road of the Dead renews the faith with an injected boost of bloody fun and originality. It takes an idea that could be too silly and turns it around with the right amount of enthusiasm for Ozploitation. There’s a unique charm to its setting, its ambition and its overall tone. If the zombie genre continues to be constant for many more years, I’d be okay so long as long as capable new filmmakers like Kiah Roache-Turner flourish to bring some new flesh and blood to the genre.