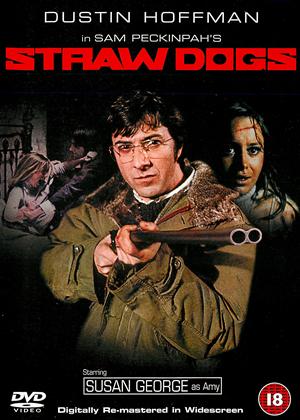 'Straw Dogs' is remembered as being one of the films which tested the limits of the old X certificate. The violence and (especially) the lingering rape scene were the talk of the pubs and the sixth-form playground of 1971. There is precious little else in the film to talk about.

Peckinpah may have a point that people are just as nasty, and just as prone to extreme behaviour in rural England as they are in urban America, and he has a very serious point in depicting humiliation being one of the drivers of conflict, but he needs characters who are much more than cardboard stereotypes, he needs a script that isn't laughably banal, and he needs actors who do not look as if they wish they were anywhere but on the set.

Peckinpah has Hoffman one minute standing up and acting the lad in an open top car, passionately kissing Susan George in full view of local workers, the next minute he's a repressed fuddy-duddy, interested in nothing but work. His wife, of course, wants all of the former and none of the latter. Told you this was a film of stereotypes. Everything is just a perfunctory prelude to the rape and the bloodbath.

Hoffman gives his usual nervy, mumbling performance. George could easily win many awards for beauty, but absolutely none for acting - though she is unfairly given the worst, most excruciating lines from a writer who presumably had never heard a woman open her mouth before. The suggestion that women may actually enjoy rape is the lowest point of this crass, nasty piece of work.

The film only becomes remotely watchable when the two greats Peter Vaughan and T.P. McKenna come on the screen. How they must have regretted appearing in such tripe.