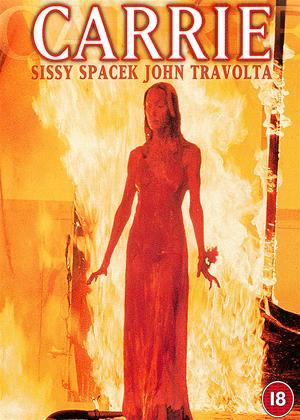 Teen-scream cult classic, high school holocaust, mildly satirical horror - however you view this film, it's clear that it has stood the test of time remarkably well. It's coming up to 40 years old, it's still excellent and still rated as 18 material, although it's not very gruesome by today's standards.

Based on Stephen King's first novel, directed by Brian De Palma (who went on to make 'Dressed To Kill', 'Scarface', 'The Untouchables' etc) and starring the beautifully weird looking Sissy Spacek in the title role with Piper Laurie as her fanatically religious mother and with a small part for the young(ish) John Travolta. [Aside: the 'teenagers' do seem to be played by actors in their 20s]

Carrie is shy and awkward, isolated and brow-beaten by her mother, and bullied at school. She is terrified when her first period starts in the school showers after a game of volleyball, and begins to develop telekinetic powers. Her classmates are punished for bullying her, but they plot public humiliation for Carrie at the Prom with (literally) buckets of blood. Carrie's telekinetic powers come to her rescue and are used against the prom crowd, the school and her mother. Suffice to say there are few survivors...

Silly stuff, yes - but it's well scripted and acted, with Sissy Spacek perfect for the role and Piper Laurie giving a superbly over the top performance. Great stuff - if you've not seen it before, watch it. If you have seen it, watch it again. 5/5 stars.

One of the great and iconic horror movies and still a great film experience, which, if you've never seen this before, makes it a film to definitely make sure you see. Adapted from the first novel of Stephen King this is a horror story that doesn't fit easily into any of the usual sub-genres. There are narrative connections with The Exorcist (1973) and The Omen (1976) but Carrie isn't a demonic possession story nor a devil worship story. The elements of extreme religious belief are there and some may read the film as one involving demonic power. However the themes here are more involved and complicated. Carrie White (Sissy Spacek) is a High School student, she's shy, introverted and a social outcast mainly due to the sheltered life she lives under the domination of her deranged mother, a religious zealot. Unprepared when she has her first period while at school she is ruthlessly bullied by the other girls led by Chris (Nancy Allen) and Sue (Amy Irving). Sue feels remorse and arranges for her boyfriend, Tommy (William Katt) to take Carrie to the school prom but nasty Chris devises a prank to pull on Carrie to humiliate her further. Unfortunately for them Carrie has a unique gift that they are unprepared for. In many ways this is a coming-of-age story linked with a narrative around feminine empowerment. The horror elements are left unexplained but that matters not because the shocks are enough in their own right. Director Brian De Palma carefully lulls the audience before unleashing the full effects of what Carrie can do and the film has some very famous scenes. This is a key film of the 1970s and today it retains the power to be unsettling and full of dread. This is also John Travolta's first major screen role. This is a great film, if you haven't seen this then give it a go, you maybe surprised. There is a remake but, in my opinion, this original is the better film