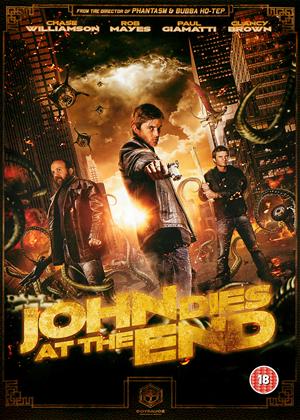 Rent other films like John Dies at the End

Reviews (1) of John Dies at the End

I cannot give it zero stars - so it will have to be 1 star!! - John Dies at the End review by NL

What can I say that will not make me sound like a horrible person??

We watched 45mins of this before we actually switched it off. That is 45mins of my life that I will never get back!! We tried to get to the end but could not bring ourselves to do it, what a ridiculous film with poor acting and extremely poor special effects. The monster/alien things looked like cheap lumps of rubber and were hand puppets. I know it is a low budget film, but come on.......this was beyond a joke

Honestly, the best acting in this film was from the German Shepherd and that is saying something

Do not waste your time, there are better things out there to do than watch this - like watching paint dry!!

While director Don Coscarelli has been known for films that completely avoid any sense of reality, John Dies At the End is another level of nonsensical. Not only is the film's story a mish mash of blurry ideas but the film concludes in a way that only makes things murkier. It’s almost as if Coscarelli gets off on knowing that anyone watching his films will be confused, even taking pleasure out of writing scenes and character beats so unrealistic and downright stupid that there is no possibility of comprehension.

Trying to summarise the films story is almost impossible but at its core, John Dies at the End is a tale about two friends, Dave (Chase Williamson) and John (Rob Mayes) and the events that take place over the course of a few days as they begin experiencing strang hallucinations due to a dark new street drug that may well be something from another planet, a drug designed to do something to the worlds population, something it is up to the two of them to stop.

That may all sound well and good but it doesn’t really help understand the specifics of the film, a murky, pretentious and infuriating film from the mind that brought people Bubba Ho Tep, an equally confusing yet much more entertaining feature. Unlike Ho Tep, John and Dave’s quest for answers is an impossible odyssey, a journey to find something that doesn’t exist as if Coscarelli didn’t quite get that far in the script before he decided to start shooting.

The film fails to make you invest in the characters as Dave and John have many problems. Their dire need to find answers matches our own but we never quite like them enough to care if they find out because John is a childish mess of a man and Dave is an enabler, a adult mature enough to know his friend is a waste of space with no desire to change. Watching the two go on a ‘wacky’ adventure sounds all well and good but when you can’t decipher the place, time or reason for their excursion it’s hard to stay interested. It also doesn’t help that by the end you still aren’t any clearer on whether on not the title comes to pass. In fact I still don’t really know if anyone in the film lives or dies, it’s just that convoluted