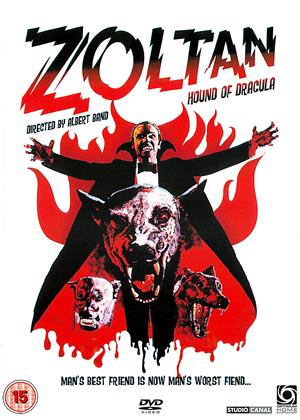 Not released
The Legend of the Seven Golden Vampires

Reviews (1) of Zoltan: Hound of Dracula

Being a dog owner is not the first thing you would associate with Count Dracula. Indeed, it would be tempting to imagine this film to be a parody. But not only does it take itself seriously, it makes a convincing case for a vampire/canine partnership.

Beginning during excavations of a Romanian crypt, Russian soldiers uncover a tomb containing coffins belonging to Dracula’s family. A soldier unknowingly removes the stake (why do people in films do that?) from one corpse and Zoltan leaps out from under the wrappings. Soon, we are treated to a flashback in which the dog is bitten by Dracula in bat form that causes the creature’s vampirism, and against the odds, the resultant scenes are very successful – real bats are used, which helps to convince.

Zoltan, his eyes glowing eerie yellow, kills the soldier and retrieves Veidt Smith (Reggie Nalder, who also plays the vampire Barlow in ‘Salem’s Lot’ a year later), former innkeeper, now vampire slave. Nalder plays Smith very well, an echo effect applied to his voice, which gives him an ethereal effect. Before Dracula himself can be revived, further blasting necessitates the escape of man and dog. As Smith states, ‘Now Zoltan, we must find our new master …’ This he does, and locates the family of Michael Drake, last descendent of The Count (despite having two children); Nalder is then reduced to staring moodily ahead and saying ‘Soon, Zoltan, soon …’ without much else, other than looking haunted, which he does with great effect. Drake sees Dracula in old family photos, which shows a surprising lapse in vampire lore.

So spectral are Nalder and the hound, they often overshadow other cast-members, including Jose Ferrer as Inspector Branco, a sub-Van Helsing type as well as Michael Pataki as Drake (as well as doubling for Dracula in brief scenes) and his family. The family are extremely appealing and escape the bratty interpretations juveniles can sometimes bring. The inclusion of their own dogs, especially the puppy, adds to their endearing qualities (the puppy’s death is a genuinely sad moment – we are all effected by mistreated animals, aren’t we?).

Sometimes, requiring animals to ‘act’ can result in awkward-looking scenes. That only very occasionally happens here - and the creature playing Zoltan is a magnificent looking Doberman, especially with moonlight glinting off his sleek fur. The various dog attacks are pretty well staged, especially when Drake recognises his own vampirised dog among their number.

‘Zoltan, Hound of Dracula’ doesn’t garner massively positive reviews. This may be due to its low budget, or viewers unable to take seriously the central premise. And yet I found it enjoyable and sincere in a way many bigger productions are not.

Just as Andrew Belling’s haunting, minimalist score runs into the credits, we are offered the probability that the story isn’t quite over. And if your heart doesn’t melt when you see the family’s undead puppy with glowing moonlit eyes, then chances are, you have no soul.

'There's More To The Legend Than Meets ... The Throat!'