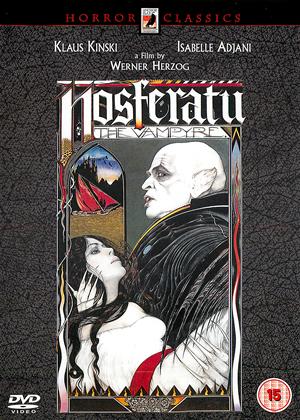 Synopsis:
It is 1850 in the beautiful, perfectly kept town of Wismar. Jonathan Harker (Bruno Ganz) is about to leave on a long journey over the Carpathian Mountains to finalise real estate arrangements with a wealthy nobleman. His wife Lucy (Isabel Adjani) begs him not to go and is troubled by a strong premonition of danger. Despite her warnings, Jonathan arrives four weeks later at a large, gloomy castle. Out of the mist appears a pale wraith-like figure with a shaven head and deep sunken eyes who identifies himself as Count Dracula (Klaus Kinski) The events that transpire slowly convince Harker that he is in the midst of a vampire.
What he doesn't know, however, is the magnitude of danger he, his wife and his town are about to experience as victims of the Nosferatu.
Actors:
Klaus Kinski, Isabelle Adjani, Bruno Ganz, Roland Topor, Walter Ladengast, Dan van Husen, Jan Groth, Carsten Bodinus, Martje Grohmann, Rijk de Gooyer, Clemens Scheitz, Lo van Hensbergen, John Leddy, Margiet van Hartingsveld, Tim Beekman, Jacques Dufilho, Michael Edols, Werner Herzog, Stefan Husar, Norbert Losch
Directors:
Werner Herzog
Producers:
Werner Herzog, Michael Gruskoff, Daniel Toscan du Plantier
Writers:
Werner Herzog
Others:
Henning von Gierke
Aka:
Nosferatu: Phantom der Nacht
Studio:
Anchor Bay
Genres:
Classics, Horror
Countries:
Germany, Classics, Horror
Awards:

Reviews (1) of Nosferatu: The Vampyre

The original ‘Nosferatu (1922)’ remains one of the greatest early films. However, possibly feeling that some aficionados might be put off by the understandably scratchy quality, German director Werner Herzog set about recreating the atmosphere original.

For the pivotal character of Dracula, or Count Orlok, Herzog cast his friend, the mighty Klaus Kinski, who brings an incredible haunted intensity to a role that seemed to be made for him. Whether staring longingly at Harker’s bleeding hand, or his bride Lucy, or snapping into inhuman speed due to his bloodlust, Kinski shines like a beacon in every single scene. It truly is an unearthly performance, he is probably the creepiest vampire of them all.

There were two versions shot of this; an English and a German version. Perhaps because English is not the actors’ native tongue, only Kinski emerges with a believable performance. Other members of the cast do well to sustain the slightly ‘removed’ atmosphere vital to such a dreamlike horror, but the acting does occasionally stray into wooden territory.

And yet everything else is wonderfully ethereal. Harker’s journey, Dracula’s arrival by boat at the Varna seaport, the infestation of plague rats, the vibrant but desolate town, the choice of location and architecture … all these things come together to make a truly spooky film. Happily, the ending doesn’t strive to placate the viewer, as Harker – one of the few survivors of the story – begins to look a little unwell.