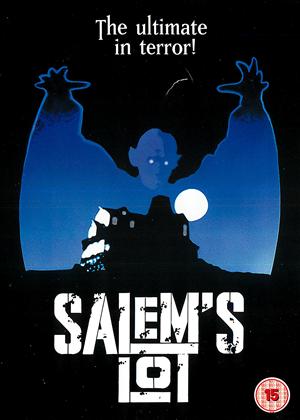 Way back on Monday 7th September 1981, amidst the police and hospital dramas, the light entertainment comedy shows and wildlife documentaries, the BBC transmitted the first of a two-part American TV Movie based on a story by Stephen King. I don’t know what its viewing figures were like, I am not aware of how critically acclaimed it was, but the following day, virtually everyone I knew was talking about it and how frightening it was. Two days later, after the final part aired, it was the only thing people were talking about. It was, as I remember, a phenomenon.

The story: The Marsten House, reputed to be haunted, has long been a source of morbid fascination for writer Ben Mears (an intense David Soul). It is based on the outskirts of the small town of Salem’s Lot, where Mears has returned after many years to write his latest book. Immediately he strikes up a closeness with Susan Norton (Bonnie Bedelia) and gets to know the characters who frequent the community, their relationships with one another and the stories they have to tell. Their lives are so meticulously intertwined that we are easily allowed into their world, into which enters Richard Straker, who is about to open an Antiques Shop there. Straker is played by James Mason, an actor of immense power. Charming, affable, elegant and capable of great evil, Straker is played to perfection. His partner, Mr Barlow, is spoken of in hushed tones, but never seen. Straker observes the peccadillos of the townsfolk from an amused distance, for he has bigger plans.

The first part of ‘Salem’s Lot’ puts the pieces into place. In the second, most of the characters die in a series of expertly handled horror set-pieces. The outbreak of vampirism results in wild-eyed, fanged children floating outside the window begging to be let in; a sick hollow-eyed gravedigger, Mike Ryerson (an incredibly sinister Geoffrey Lewis) falling from an upper story window and never hitting the ground; people rising from their graves with a familiar sickly pallor. It is difficult to imagine any of these set-pieces being handled better. Director Tobe Hooper keeps things sinister and uneasy, taking the situations from King’s book and transferring them seamlessly to screen.

‘Salem’s Lot’ is a triumph on every level and still packs a punch today. Only Marc Petrie (Lance Kerwin) threatens initially to irritate – but then, he is something of an outcast, a bowl-haired horror ‘nerd’ and monster-kid academic. Really, that should endear him, but it doesn’t somehow. Yet his swottish leanings are essential in battling what becomes a town of slavering undead, which he does with considerable expertise.

Barlow’s major scene, where he and Straker gate-crash a Priest’s visitation on the Petrie family, where he rises from a black cloak to about 7 feet tall, is one of many highlights. Straker’s patronising name-calling of ‘holy man’ and ‘shaman’, faith against Barlow’s blue-skinned, heavily-veined face, with crucifix proving frighteningly ineffective – all add up to a set-piece of immense proportions, which, like Barlow’s involvement, is over far too soon.

This is a classic of the horror genre. Creepy and a relative of Hammer Horror, it gives a backdrop of small town culture and characters enlivening what might have been just another vampire story. It is much better than that. Originally a TV series, the whole item running three hours long as a movie is perfectly paced dishing out the thrills with restraint, no splatter and needless 'more is less' gore. This is a movie you have to see if a horror fan and if not, see it anyway as one of those classics of movieland.