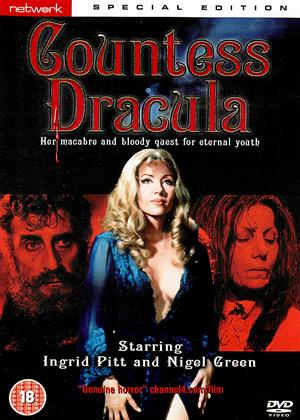 Synopsis:
Medieval Europe. The embittered old widow Countess Elisabeth (Ingrid Pitt), rules with a rod of iron alongside her lover, Captain Dobi (Nigel Green). In a fit of rage she strikes out at one of her chambermaids and is amazed to discover that, where the maid's blood has splashed her face, the skin beneath has become youthful and smooth. She slaughters the girl and bathes in her blood, making herself look much younger. Finding the key to eternal youth she coerces Dobi to abduct a string of young girls to keep her supplied with the blood she craves to stay beautiful...
Actors:
Ingrid Pitt, Nigel Green, Sandor Elès, Maurice Denham, Patience Collier, Peter Jeffrey, Lesley-Anne Down, Leon Lissek, Jessie Evans, Andrea Lawrence, Susan Brodrick, Ian Trigger, Nike Arrighi, Peter May, John Moore, Joan Haythorne, Marianne Stone, Charles Farrell, Sally Adcock, Anne Stallybrass
Directors:
Peter Sasdy
Voiced By:
Olive Gregg
Writers:
Jeremy Paul, Alexander Paal
Studio:
Network UK
Genres:
British Films, Horror
Countries:
UK

No horror, no fangs, lots of ham, poor script - yet I liked it. It has a curious 'period' charm :) - Countess Dracula review by RP

Hammer Films made many low budget pseudo-horror films from the 1950s - 1970s and this is yet another. The studio always seems to have made 'hammy' films and this is no exception, with dodgy acting, a dodgy story and a dodgy script.

The leading role is played by Ingrid Pitt, aka the 'Queen of British Horror', as a character nominally based on Countess Elizabeth Báthory de Ecsed. The film's title 'Countess Dracula' is a shameless attempt to cash in on Hammer's earlier successful vampire films - there isn't any vampirism here.

The main male lead is played by character actor Nigel Green as Captain Dobi, with Sandor Elès playing the unlucky young Lieutenant who is seduced by the rejuvenated Countess.

The story is about an elderly countess who regains her youth by bathing in virgin's blood, apparently a sort of magic anti-wrinkle cream, but is eventually (of course) found out. There's no horror (despite this still carrying an 18 certificate), very little blood, but there is the occasional bare chest.

[Aside: Curiously, the DVD includes two extras entirely unrelated to the film, a couple of short plays, one with Nigel Green, the other with Ingrid Pitt in a Brian Clemens 'Thriller' episode]