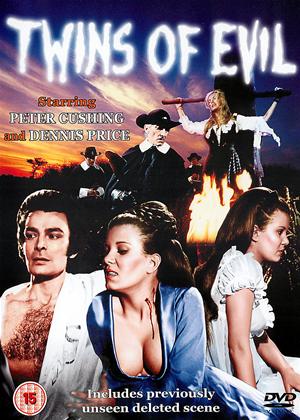 Reviews (2) of Twins of Evil

Playboy ‘playmates’ Mary and Madeleine Collinson play Maria and Frieda, two recently orphaned twins from Venice, who have the additional misfortune to be coming to live with their Uncle Veil, the constantly furious leader of ‘The Brotherhood’, a group who bastardise their interpretation of religion by sacrificing young girls whom they believe are ‘servants of the devil’. One of the best lines in the film is Veil’s response to his nieces not wearing black after two months of mourning. On seeing their smart clothes, he intones, finger raised to the Heavens, “WHAT kind of PLUMAGE is this??”

Peter Cushing gives one of his best performances ever as Gustav Veil, a fairly complex character as written. With seldom few genuine ‘good guys’ on display (hero Anton (David Warbeck) is a teacher with less than professional designs on Frieda, who is, after all, one of his students) , Veil is typically written as a hypocritical, tyrannical yet ultimately fragile and humane authority figure. Cushing plays every contrast to the hilt, so that rather than hating him, the viewer is drawn into the moral dilemma of how to deal with the demonic forces he has given his life (and the life of those around him) to destroying, when such forces infest his own family. In his perverted translation of religion, he and his followers, all aroused by each other’s vehement hatred of impurities, are responsible for the deaths of more innocents than the corrupt Count Karnstein – and yet when Gustav falls, as he inevitably must, he dies a (kind of) hero. Real life tragedies etched ten years of age onto Cushing’s countenance (compare his appearance here to his last Hammer outing ‘The Vampire Lovers’) and leant him a forlorn countenance that adds to Veil’s vulnerability.

Damien Thomas was rumoured to be in line to play Dracula for Hammer once Christopher Lee had finally hung up his fangs – and from his performance here, it is easy to see why. The twins are also very good here, despite having little formal acting experience – subtle differences in responses separate the mischievous Frieda from the wholesome Maria very well; no mean feat considering they are dubbed throughout. Dennis Price is exceptional as the weasely Dietrich. Often wasted at this stage of his career on cheap sex-comedies and low-budget horrors, he is exemplary here, especially when ineffectually attempting to excite Karnstein with some inept devil-worshipping entertainment. Harvey Hall, the only actor to have appeared in all of this trilogy (alongside Kirstin Lindholm who is briskly burnt at the stake), is his usual dependable self as Franz, one of The Brotherhood. Finally, Katya Wyeth plays the third incarnation of Carmilla/Mircalla, (who speaks in crisp, clipped RC English, without the European intonations of her predecessors) who – in her one scene – incestuously seduces The Count and turns him into a vampire (which begs the question, who was responsible for the vampire attacks on villagers before Karnstein’s turning?). Apparently, Ingrid Pitt was offered the part, but possibly due to its brevity, turned it down.

Director Tim Burton often cites Hammer films as an inspiration for the visuals of his films, especially ‘Sleepy Hollow (1999)’. It is easy to imagine he refers specifically to ‘Twins of Evil’ as virtually every scene is reminiscent of the darkest gothic fairy-tale, with great use of rich colours against the shadows. Apparently the budget for this wasn’t much higher than the previous ‘Lust’ film, which is astounding, as this looks magnificent and a true credit to Director John Hough.

The music also separates this from others in the trilogy. The bombastic score is exciting and plays against some of the more gruesome scenes (the elongated burnings, for example), and yet makes them more tragic and frightening than if more traditional incidentals were used. ‘Twins’ is as good as anything Hammer has ever produced.

This third film in Hammer's so-called "lesbian vampire trilogy" (though the vampires in the second two films are very heterosexual indeed, even the ones who are supposed to be the same lesbian character Ingrid Pitt played in "The Vampire Lovers") is arguably the best, and certainly an improvement on the laughable "Lust For a Vampire". Peter Cushing, in his first rôle after a break from acting due to the death of his beloved wife, brings a desperate sadness to the part which probably didn't involve much acting, and was never better than he is here as a joyless, merciless Puritan who is nevertheless genuinely trying to do what he thinks is the right thing, not unlike the hapless Sgt. Howie in "The Wicker Man".

Unfortunately, the other actors aren't quite so accomplished. The Collinson sisters, cast because they were Playboy's first twin playmates of the month rather than for their acting abilities, both had to be dubbed (by different actresses, which helps the viewer to tell them apart), and, considering the reason they were cast in the first place, strangely get only one partially nude scene. They look very sweet, but that's about it. Damien Thomas, one of several forgotten actors Hammer tried out as potential replacements for Christopher Lee, who was getting more and more reluctant to keep doing increasingly contrived Dracula movies, is tall, dark and handsome in a very seventies way, but it's pretty obvious why he didn't end up getting Christopher Lee's job after all. Somebody or other plays a dashing young hero who doesn't actually do all that much. And although horror veteran Dennis Price is great fun as a reluctant and rather inept henchman who isn't terribly good at organizing satanic debauchery for his master, he has very few scenes.

As for the script, it's all over the place, to the point where people are bitten by vampires before any vampires exist to bite them, and some of the scenes of the Puritan vampire-hunters gleefully hunting down young women who aren't virgins because that's obviously the same as being a vampire are so Pythonesque that I suspect the scene where they all keep shouting "Burn her!" was directly parodied in "Monty Python and the Holy Grail". More damagingly, while it's not exactly unpleasant to watch the Collinson sisters arguing in flimsy nightgowns, there's far more of that than the actual horror you might have been expecting, which is in very short supply until the last ten minutes. So all in all it's an above-average Hammer film which entertains without exactly being a masterpiece. Great theme tune though. And remember to look at the DVD extras: there's a hilarious deleted scene where 18th. century schoolgirls sing a ludicrously anachronistic pop song for no reason at all.