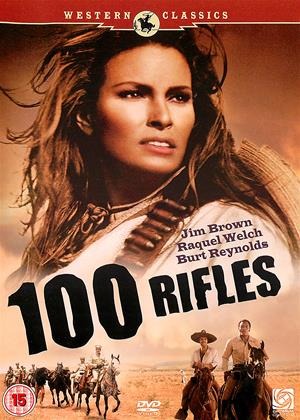 In the late sixties Hollywood hurriedly learned a few lessons from the massive popularity of those new-fangled "spaghetti westerns". Unfortunately it didn't learn them very well. This is a typical example of an American western in the Italian style, with lots of violence, some of it quite nasty, taking place against a Mexican revolutionary backdrop. There's even a bit of gratuitous nudity to prove it's for grown-ups. Sadly, the bizarre stylistic flourishes of a true spaghetti western are completely absent, along with all the fun.

The elephant in the room is the casting. They seem to have gone overboard in the political correctness department, resulting in the three main characters all being non-white, even though there weren't enough big-name actors of the appropriate races available. Jim Brown is black so that's OK, and you can more or less get away with casting Burt Reynolds who really was part-Cherokee (though not a very big part) as a mixed-race man, but Raquel Welch as a full-blooded Yaqui Indian? What were they thinking???

Further problems arise with the plot. The clumsily established backstory makes Jim Brown's sheriff so stubborn that he sometimes seems half-witted, forces him to unconvincingly bond with Burt Reynolds by literally chaining them together (a plot-device blatantly pinched from "The Defiant Ones"), shows us so many examples of the Mexican army being beastly to the Indians that it becomes depressing, and wastes a massive amount of its running-time having the central trio bicker repetitively about politics. As for those crates of rifles everybody keeps going on about, they're a very dull Macguffin that the Indians don't really seem to need, since whenever the script decides to let them stop being victims for a while, they're capable of storming heavily fortified Mexican army strongholds just fine without them. And anyway, their ultimate weapon turns out to be Raquel Welch in a wet shirt.

The big battle scenes are poorly staged and lifeless, the three leads spend so much time being annoyed with each other that they get on the viewers' nerves too, and there's nobody in the whole film interesting enough to care about; one barely relevant minor character stands out simply by not being completely predictable. Ultimately the ingredients just don't gel, and the whole thing falls flat. You're probably better off watching the similarly-themed "Vera Cruz", to which this film owes an enormous debt. Despite being made in 1954, it's massively superior in every respect. Unless of course you think no western is complete without Raquel Welch in a wet shirt.