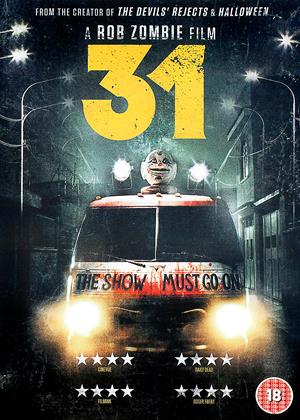 He gets a lot of stick for his style of horror films, does Rob Zombie. It is heartening in many ways, to find he appears not to care, and continues to release projects in his own raw, coarse style. It is no surprise to find wife Sheri Moon pretty central to the plot here; no surprise either that she goes through a pretty punishing time.

The killers are lazily-named Sick-Head and Doom-Head etc. Schizo, Psycho, Death and Sex make up some of the other Heads. All unable to growl through a sentence without at least a handful of ‘f*****g’s’ therein, they present a destructive, unhinged ensemble not dissimilar in personality from our alleged heroes. Pretty soon, we are knee-deep in campy, OTT gore, shrieking and black, tar-like blood, where the identity of the characters all melt into a melee, and come a distant second to the graphic killings. I certainly have no problem with this if in the right mood, just as I had no problem with RZ’s re-imagining of the ‘Halloween’ franchise – those films remain underrated in my view. Equally, his earlier ‘The Devil’s Rejects (2005)’ is somewhat over-rated, and it is this film with which Zombie compares ‘31’.

The problem with this for me is, after a while it ceases to shock and just becomes monotonous. Even the introduction of a German-growling fellow in a tutu attempting to club someone to death isn’t as much fun as it sounds. All the characters seem to have the same character, any lines are screamed and littered with so many profanities it goes beyond parody, and everything … just is. There is no lead-up to speak of, each violent act is loud, in your face and the familiarity with this repeated approach quickly wears thin.

I enjoy RZ films for their mad violence, wall-to-wall grotesques and graphic horror, but when that’s all there is, the results are a little wearing, but too loud to allow you to drift off.

Still have No idea why 31....but really matters very little .

As with ALL Rob Zombies movies, ALL the participants are incredibly unpleasant so it is very hard to Root for anyone on Either side.

Good or Bad ? ...surely BOTH sides are Bad , they All seem like Assholes after all.... so it doesnt much matter who lives or who dies .

I've been a fan of Rob Zombie since the White Zombie days and I loved House of 1000 Corpses, when I eventually managed to track it down... Fair play to him, he's managed to make a lot of what he is, which is horror, gore and all things associated with it. I even liked his remake of Hallowe'en, the first one anyway. However I thought the Devil's Rejects was awful, but being (not very loosely) based on Texas Chainsaw Massacre I wasn't surprised because I thought that was awful as well. So I approached this as a fan, but not expecting very much, and for the first 20 minutes or so I wasn't impressed. But.. it does get better, if you like this kind of thing, which is pretty much mindless gore, and some let's say eccentric characters. There is a plot (people get kidnapped by weirdos, forced to play a game to survive.. so pretty much Saw really), and there is a lot of gore, and a lot of swearing. Whether you think it's worth your 90 minutes or so... depends on how appealing you found his previous movies, and the Saw films (and that genre), if you liked them, you may like this. If not, probably best giving it a swerve.

31 is a disjointed, disfigured mess of loud noises, an over-abundance of miss-matching colors and amateurish cuts that have nothing to do with why people tend to watch movies in the first place. From the director of The Devil's Rejects, House of 1000 Corpses and more films with ridiculous plot and excessive gore just for the sake of it, now comes yet another generic slasher/horror type of film that brings nothing new to the table. Rob Zombie has indeed outdone himself: this time in the opposite direction on the spectrum of film valorization.

Rob Zombie’s flick features some innocent partygoers that fall into the hands of masked psychotic killers just for the sake of it. And that’s it. There are no character arcs, actions motivated by logical deductions and outcomes; just people who are bad at directions and other group of people who are bad at empathy, albeit in a more rigorous way than most.

These people cross ways when they shouldn’t have, and thing go awry. Unfortunately, due to the excessive cuts and the shaky-cam nonsense, nothing one sees makes the least amount of sense. There is also a shallow perspective of space, so most of the time it feels as if the mass of human bodies jump through time and space and end up in a misty forest, when they previously tested their luck in a creepy, abandoned warehouse.

As said, the actors are not given much to work with. But then again, maybe they’re lousy actors, or are just beginning to hone their craft. Either way, it’s safe to assume that the screenplay boils down to body count, and is not made to make sense to whoever happens to read it.

More often than not, 31 will force your neck to jerk to the other direction from whence the movie plays, due to poor editing and the previously mentioned shaky-cam failure. Action scenes in 31 are not exempt of this rule, since one is constantly attacked by a barrage of scenes depicting blood-soaked clothing and faces sprayed in red that don’t amount to anything in particular. The logic behind it is (I presume) to feel the horror these victims feel from their own perspective. In that regard, 31 had spectacularly failed.

There is one particular scene however (stretched in two instances) that almost feels like ‘a needle in a haystack’ type of situation, given the amount of starkness one is subjected to while witnessing Rob Zombie’s 31. I’m referring to the narration of one Doom Head, whose intriguing story is the only thing barely watchable in the movie’s overly-stretched running time.

Overall, 31 starring Sheri Moon Zombie, Jeff Daniel Phillips, Meg Foster and Malcolm McDowell is perfectly unwatchable by any stretch of the imagination one can think of.