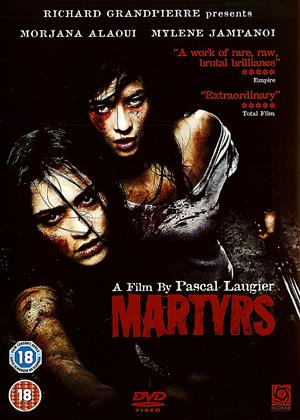 I'd heard alot about this; 'disturbing', 'bloody' and one of the most 'horrific' films I've ever seen. I loved it!

Apparently there will be an american remake, so this needs to be seen before it's butchered by Hollywood hacks! And the ending really needs to be experienced!

Martyrs is an incredible experience, a film that will divide opinion and provoke debate. I am still shell-shocked and flabbergasted by the experience. It’s brutal, unstoppable and features a huge amount of blood and suffering, with the emphasis on physical, rather than special effects. Not a ‘torture porn’ movie, Martyrs is far superior to Saw, Hotel and films of that ilk. Pascal has brought a sense of French style and composure to a tired genre, the end result is a horror that sets a new standard. At the end you will have questions and the huge ‘making of’ documentary is worth viewing.

I can only echo what other reviewers have posted, Martyrs is a unique and truly disturbing film. I would consider myself a horror fan, fairly gore tolerant and someone who doesn’t scare easily, but Martyrs is the first film in a long time that genuinely made me feel very uncomfortable with what was being played out on screen. The first half of the film is a fast paced gory French horror/revenge thriller; the second half is something altogether quite different, it’s slower paced, less gory but far more horrific and disturbing, and incorporates an intelligent storyline which puts the horror and violence into context. Even days after seeing this film it still makes me feel uncomfortable thinking about it, and while Martyrs is an outstanding piece of French Horror and something I'm pleased I saw, there is a part of me that wishes I had never seen it.

Stays with you. - Martyrs review by CP Customer

My thoughts are similar to the other reviews. As brutal as film can get.

Watch it if you dare!

Very powerful, graphic cinema, this piece is not for the faint of heart. Despite it's gratuitous nature, the director highlights some interesting philosophical arguments offering progressive thinking rather than a film that delights it's viewers with gore.

Hats of to the cast and director, very difficult to watch in places.

I've hesitated for quite a while before writing a review of this film. It left a lasting impression on me, not particularly because of the scenes of torture shown here – disturbing though they are - but the nightmarish possibility that there might be such individuals in reality. 'Martyrs' is a French-Canadian film with subtitles – it contains the most visually awful torture scenes that I have seen depicted on film. It is not for the squeamish and is genuinely disturbing. Having said that, not only is the storyline convincing but it made me jump a few times and the final part had me cringing, which can't be bad. Entertaining? Well, you certainly won't laugh at it, and it's not a film for a cosy night in with the family. But it is a well realised horror film for grown-ups – just don't watch it with your granny. 4/5 stars. Highly recommended.

There was a time when France was not particularly praised for its horror film output. This, despite the outpourings of Jean Rollin’s personal voyage of vampirism, zombies and the like; this, despite the supreme ‘Eyes without a Face/Les Yeux Sans Visage’, the film/television series ‘The Returned/Les Revenants’ and films like ‘The Pack’ and ‘Martyrs’.

There is a famous photograph sometimes known as ‘Napalm Girl’, featuring a nine year-old Vietnamese girl running naked and terrified, away from the carnage caused by an aerial napalm attack in 1972. As effective as any anti-war poster, this picture might have inspired one of the opening scenes of this truly disturbing film. Brutally attacked and imprisoned, half-dressed Lucie Jurin escapes her prison and runs down the street, making her escape.

The next time we see her, she has met Anna in the orphanage where she has been placed. She is terrorized by the image of a decaying woman, possibly a ghost.

Anna and Lucie become lovers and vow to get even with the torturers; years later they burst in on a happy, respectable family and brutally murder them. Surely these law abiding people can’t have been responsible?

This film succeeds in wrong-footing the audience and providing twist after twist. Not only ARE these people (partially) responsible for Lucie’s degradation, but moments later Lucie is killed, and it is Anna that becomes the centre of attention in a narrative that then assumes the moniker ‘torture porn’. Rarely have I seen filmed abuse presented so uncompromisingly. Anna is ritually beaten, fed the bare minimum gruel and if she resists, is beaten yet more. Her broken face and body is heart-breaking to see, extremely uncomfortable – her captors’ only comment is that they are amazed she is still alive. She therefore has one, final, appalling punishment to go.

Despite spoiler warnings, the reasons for this abuse will not be mentioned here, other than to say, it is ‘respectable’ establishment figures that are behind it all, and everything then comes to a very final (and satisfying – if that is the right word to use) end.

This is an incredible, profound, horrifying film - not one I’m sure I’ll ever see again, but if you can stomach it, I’d recommend watching once.

Wow absolutely BRUTAL film. Well edited and structured, utterly chilling, rough, hard to watch and very much ott but a must for any horror fan. Sinister.Sick.

Deserving of its reputation - Martyrs review by VG

I have a pretty sick attraction toward the more gruesome movie, particularly when it has a sense of the believable but this was even too close to the mark for me. In a nutshell it is 90 minutes of gratuitous violence.