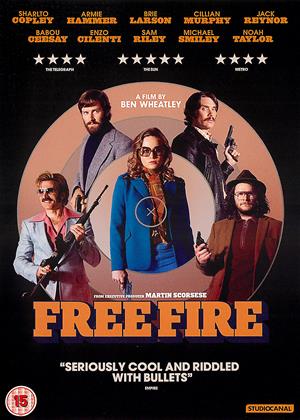 Like the bastard offspring of Pulp Fiction and Lock Stock... - Free Fire review by Schrödinger's Cake

From the moment the opening credits roll, this is a film that you just know is going to deliver the goods. It feels like the bastard offspring of Pulp Fiction and Lock Stock, and comes complete with a superb cast, a dodgy 70’s sound track, gorgeous lighting, and beautiful camera work.

It’s true that somewhere around the middle of the film it does run out of steam a bit, like a boxer who’s failed to pace theirself and are punched-out before the round is done. However, it manages to pull itself together and get back on form quickly enough.

There are plenty of worse ways you could spend your evening!

The first half hour was good, with some witty dialogue and an interesting setup. After that though I felt it became a bit dull, probably because it was so static and a bit repetitive.

Pretends to beset in the USA, but fairly obvious that it is filmed in England.

The cast are good, but did they really PAY for a script ? Every other word was f*** , and its amazing how many shots they can fire without reloading.

But I did watch until the end to see who survived, and the. The extras were interesting as to how they planned the shootout, and how they filmed the car driving over a gunman’s head !

Great idea, but only one idea - Free Fire review by Champ

This film is a great antidote to the usual Hollywood shoot-em-ups, where bullets either kill you immediately or miss completely.

The setup was great, with Tarantino-esque dialog, delivered by distinct characters, and it built a sense of real tension. When the tension finally explodes, the film really delivers, and keeps you on the edge of your seat. But then...it's just more of the same, and it started to feel like the film only had the one idea. But, having said that, it's still a good idea!

And the film should definitely get extra kudos for its use of John Denver :-)

What a very silly film - Free Fire review by BE

What a waste of time. One of the worst films I have ever seen. A job to identify any of the characters behind their moustaches and dishevilled hair. One star for the gun choreography.

Ben Wheatley has been one of the UK's film makers to watch since the inspired darkness of "Kill List', but this is a turkey that ca neither be excused or denied.

Set in a large disused factory, the characters are a mixture of American low entry arms dealers and Irish terrorists, meeting to exhcange cash for guns.

For little apparent reason everyone starts shooting at each, but miraculously hardly anyone seems to stay shot and for the tiresome last hour, people are crawling around uttering unfunny dialogue. It really is one of the worst movies of the year, which seems like the filming of a script half finished.

This would be a ace film to be in as it’s just a big game of shooting each other, kind of like playing cops and robbers as kids. To watch it was painful.

High expectations - but a big let down. - Free Fire review by DB

IF EVER there was a case of me having very high expectations for a film, and really wanting to see it - and then having a crushing sense of disappointment - it is with FREE FIRE. I have seen BEN WHEATLEY films before, I like his last film, HIGH-RISE for instance. On paper, this looks so good: executive produced by MARTIN SCORSESE, and Ben Wheatley is a fresh British talent. The concept is simple enough: a shootout in a warehouse. But once the action started, I found the editing so frenetic that I quickly lost track of who everybody was. The Irish dialogue was hard to follow, because the accents were so thick and heavy (I aqctually watched the film twice - the second time with the subtitles option turned on). There was also a bit too much emphasis on John Denver on the soundtrack for my taste. It is South African actor, SHARLTO COPLEY who totally steals the show as Verne. In conclusion: I would have to say QUENTIN TARANTINO handled the same sort of material, but did it better in RESERVOIR DOGS and that was 25 years ago.

The cast is really good but all they're asked to do is crawl around on the floor firing the occasional bullet at one another, it's a short film but it still feels 30 minutes too long, there is some witty dialogue but it's no where near enough to save it, Ben Wheatley must be the most overrated directors around, critics adore him and do far I can't see why.