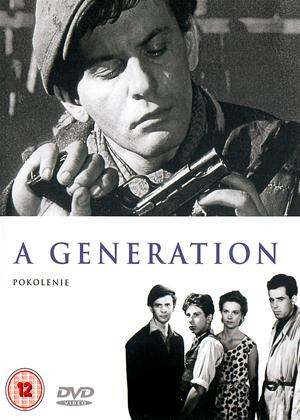 Reviews (2) of A Generation

A dark place illuminated. - A Generation review by RhysH

A dark film. Dark in its cinematography and dark in its subject matter. It is hard to imagine living under a regime imposed by a foreign army but Wajda had first hand experience, his father was shot by Stalin's agents in the Katyn massacre. This film is set during the Nazi occupation of Poland and explores the politicization of the youth at this time.

Wajda had just finished film school when he made this film, it shows the influence of Italian realism without losing any of its Polish credentials.

Wajda has said that he was not entirely happy with the film arguing that it did not quite capture the sense of desperation he wanted. It, nevertheless, remains a potent film about power and resistance.

Tadeusz Lomnicki, one of the few actors who had appeared in a film before, plays the lead Stach with a mixture of naivety and political awareness. At times his smile almost looks imbecilic but this is the mask of a very aware young man. An excellent performance.

Roman Polanski is in the cast and Wajda's influence on him can be seen in his film "The Pianist".

Rites of passage tale - A Generation review by JO

A rites-of-passage tale set in Nazi occupied Poland, 1942. Stach is a poor youth who at the start of the film steals to make ends meet. After a tragic incident while he is stealing coal from a Nazi train, Stach is employed as an apprentice for a Joinery business. Here he meets and falls under the influence of an avuncular Communist sympathiser, Sekula, and falls in love with the beautiful Dorota, leader of the Polish underground resistance. Stach becomes increasingly involved in dangerous missions against the oppressive Nazis and comes to learn about humanity and loss. Despite its potentially bleak subject-matter, A Generation is a lyrical film with a powerful message about the political awakening of the Polish youth.