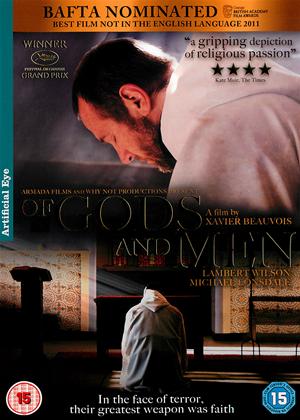 Reviews (3) of Of Gods and Men

Wonderful - Of Gods and Men review by JG

A fine piece of filmmaking. The actors do seem to inhabit the roles they play; the performances are utterly convincing. A tragic story told with the 'right' mood. There's a good feeling of the relationship between the monks and the local community, the respect of the monks for Islam is clear. Tragic story but well worth watching.

Powerful - Of Gods and Men review by RB

One of the most sensational films I have ever seen. Powerful, gripping and lovingly made. Not worth missing.

Sad - Of Gods and Men review by CP Customer

not alot to say very sad that these wonderful monks chose this when they could have left. Martydom wins, which is sad .

In 1996, seven Trappist monks who lived in largely Muslim Algeria are kidnapped and killed. The remaining monks in the monastery decide to stay even with the escalating political and religious turmoil. ‘Of Gods and Men’ is the story of the monks and their reasons for staying even when their lives become terribly in danger.

‘Of Gods and Men’ is based on true events in Tibhirine, Algeria. It shows a chronological account of what happens to the monks after the brutal incident, leading up to their confrontation with the terrorists and government officials until their unfortunate ends. The socio-political theme is evident throughout – it is what triggers all the conflict that happens next after all, but with it, director Xavier Beauvois does not break away from the monks themselves. The film does not do away with the violence but it still remains quiet and subtle, a study on how people treat each other when one’s religion comes to play.

With its tremendous ensemble cast headed by veteran actors Lambert Wilson and Michael Lonsdale, a quaint cinematography, and detailed production design (it was filmed in Morocco but was made to look like Algeria), it is a dramatic film for the spiritual man. No wonder the film was awarded the Grand Prix at the 2010 Cannes Film Festival.

The conflict between Christians and Muslims has been well-known to say the least but somehow in the film, peace and harmony has been achieved. Up until the incident with the kidnapped and murdered monks, the community and its people thrived on tolerance and lived quietly together. But religion will always be a sensitive issue, spoken about or not. It will eventually come up and beliefs will be reinforced and most times, it’s done with hate. The monks choose to stay even when the odds are stacked against them. There’s not a possibility of death – it is a certainty. Yet they are defiant, continuing to live their lives in a place where most of its occupants want them out. Besides faith, the monks are making a stand, a true act of a martyr.