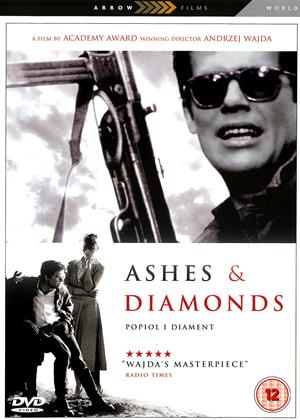 Synopsis:
On the last day of World War Two in a small town somewhere in Poland, Polish exiles of war and the occupying Soviet forces confront the beginning of a new day and a new Poland. In this incendiary environment we find Home Army soldier Maciek Chelmicki, who has been ordered to assassinate an incoming commissar. But a mistake stalls his progress and leads him to Krystyna, a beautiful barmaid who gives him a glimpse of what his life could be. Gorgeously photographed and brilliantly performed, Ashes and Diamonds masterfully interweaves the fate of a nation with that of one man, resulting in one of the most important Polish films of all time.
Actors:
Zbigniew Cybulski, Waclaw Zastrzezynski, Adam Pawlikowski, Ewa Krzyzewska, Bogumil Kobiela, Jan Ciecierski, Stanislaw Milski, Artur Mlodnicki, Halina Kwiatkowska, Ignacy Machowski, Zbigniew Skowronski, Barbara Krafftówna, Aleksander Sewruk, Zofia Czerwinska, Wiktor Grotowicz, Irena Orzecka, Mieczyslaw Loza, Halina Siekierko, Tadeusz Kalinowski, Grazyna Staniszewska
Directors:
Andrzej Wajda
Writers:
Jerzy Andrzejewski
Aka:
Popiól i Diament
Studio:
Arrow Films
Genres:
Classics, Drama
Countries:
Poland, Classics, Drama

Reviews (4) of Ashes and Diamonds

The last in Wajda's war trilogy an excellent example of Polish realist cinema.

Zbigniew Cybulski who plays the main part of Maciek was asked to base his performance on the style of James Dean and there is certainly something of that in the performance of Maciek's almost total indifference to the life he leads, that is until he falls in love. An engaging performance.

Eva Krzyzewska gives a fine performance, not just the simpering barmaid but a strong and intelligent woman.

The film is beautifully photographed, often from a low level and each shot exquisitely framed

A taut political thriller set in the days immediately after the liberation of Poland in 1944. The country is facing an uncertain future torn between Nationalism and Communism. Wajda's classic Polish film, influenced by Italian Neo-Realist cinema, questions the post war identity of Poland through its anti-hero protagonist.

Maciek, a young soldier in the right-wing Nationalist Army, is ordered to assassinate the newly arrived communist district secretary. The initial attempted assassination is bungled and he winds up killing two innocent civilians. Ordered to try again, Maciek falls hopelessly in love with a girl at the hotel where he and  his target are staying. His love for her forces him to question his conscience and the loyalty to his cause. Maciek learns that his lifestyle is meaningless in the new, post war Poland.

An excellent, gripping film with a tour de force performance by Cybulski. The cinematography is gorgeous: every frame is exquisite. Highly recommended.

I'll first say that Ashes and Diamonds was a lot different to what I was expecting, I thought there would be a lot more guns etc. I thought it would be a story of a kind of serviceman which Maciek kind of is looking at it, I couldn't quite tell what he was part of exactly! Anyway, I still thought it was decent and the film had a couple of good moments and quotes.

I was kind of confused by what the film was though, was this to show a celebration after WWII? Or was it meant to be more of a love story? No idea honestly but it does work in a way, just all in all I didn't find a lot of scenes that memorable, there's some good conversation between Maciek and the lobby desk clerk when they find out they are both from Warsaw and between Maciek and his lover, all in all it's worth a watch to see what Poland was like when Germany surrendered in WWII, but I was expecting a bit better, there's not that many memorable characters in the film and a lot of the scenes left me feeling like they weren't that iconic, this is a far off comparison but even in a film like Rules of the Game for example, in that movie I wouldn't say there was a bad or boring scene, but in this I felt like there was some.

Also, I'll add the film deserves some credit for some of its cinematography, like the fireworks at the end, superb! Overall though I'm torn.

Not Much To Celebrate - Ashes and Diamonds review by NC

1945 meant the beginning of freedom for some countries, but for Poland it only signalled a shift of power from Nazi to Soviet - hardly something to celebrate. Ironic then that much of the film revolves around a party to mark the end of the war, and a local dignitary's promotion. It's a heady cocktail: political expediency by such people as councillors and the military anxious not to rock the boat with their new masters, mixed in with continued resistance, as young Maciek keeps on killing, and thinking little of it, until he meets Krystyna.

Only an expert hand could blend the two contents into a winning formula. There are quite a few reasons for thinking Wajda comes up short. First of all, it's too specialist and particular. Much of what is said in irritatingly long conversations can only be wholly understood by a native audience, or someone learned in Polish history. The rest of us are left to grasp the gist and cling on. There are too many of these longueurs. Secondly, the acting. Maciek needs to show two contrasting sides of his personality: an insouciant assassin, and a young man hitting the wall of an emotion he never before knew existed. Zbigniew Cybulski is nowhere near up to the task. Unbelievably he isn't the worst actor in the film. Bogumil Kobiela, the Danny Kaye lookalike, unfortunately also acts the fool like Kaye, much to the detriment of the serious meaning trying to be conveyed. The lovely Ewa Krzyzewska shows up best, a barmaid hoping to find a chink of light in a drab town and a drab future.

So what's left? There are about half a dozen brilliantly realised, exquisitely photographed scenes worthy of Angelopoulos at his best. But even then, whereas the Greek would dwell on the images, allowing the viewer to float in their beauty, Wajda almost throws them away in next to no time.

Some call this one of world cinema's great films. What a massive disappointment to find it is nothing of the kind.