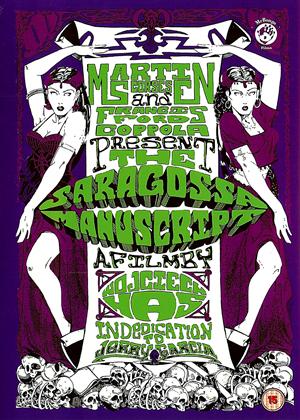 Reviews (3) of The Saragossa Manuscript

Beautiful, but tedious - The Saragossa Manuscript review by MS

I've been trying to work out why this movie is so boring. It looks great, it manages to summon up an atmosphere of menace, but it doesn't hold your interest. For one thing, he characters are uninteresting -- the hero is a total cardboard cut-out -- and the individual adventures aren't very interesting either. It doesn't help that there is no point at which you know what's going on. Mystery, confusion, incomprehensibility -- all of these could work, but there needs to be something in the plot that you understand, or at least a main character that you care about. As it was, after an hour or so, you don't care what happens to the hero, or anybody else in the story.

I would also like to add that the women are total ciphers -- they look and act like harem beauties from an inferior Hollywood epic.

Well, if you are looking for something different, this is it.

An illustrated book discarded at an inn narrates the adventures of a soldier as he journeys through a quasi-surreal landscape of Tunisian princesses, opportunist cads, treacherous women, hanged cut-throats , sorcerers, and men with an idiotic sense of honour. But it is most definitely NOT the usual silly adventure story, there is much more to this film once you get into the storyline. Or rather, storylineS, because this is a case of nested narratives and recurring scenes under slightly different circumstances.

I have not read the book, but I rather suspect the original was not meant as a comedy. All the same, the film is also funny, and in spite of its romps and caricaturesque characters, it has a surreal, almost sinister backdrop and a rather intriguing plot. Great black and white photography, and much effort put on the sets and costumes too. I'd call it a classic, and I am amazed it is not better known.

Just one warning: it is very long and demands a bit of effort on the part of the viewer.

Not quite surreal enough - The Saragossa Manuscript review by dl

Being a big fan of surreal cinema this was one i had been looking forward to for quite a while.Ive only seen Wojciech Has later film The Hourglass Sanatorium which interested me visually so was up for this 3 hour epic.Things get off to a great start the atmosphere the characters and the restoration looks absolutely fantastic.As we move on though the films narrative structure becomes both a curse and blessing its very imaginative in its way of interweaving its tales from one character to the next gradually unfolding its puzzle but it does come at a price has the majority of its tales come off a bit over indulgent extremely long winded and very repetitive using the same locations over and over.It’s also not quite as surreal as i was hoping/expecting but did have one or two moments that come off very memorable thanks to its brilliantly executed visuals.Usually long films don’t phase me but had to do this one in two sittings which kind of tells me this will be a one time watch.6/10