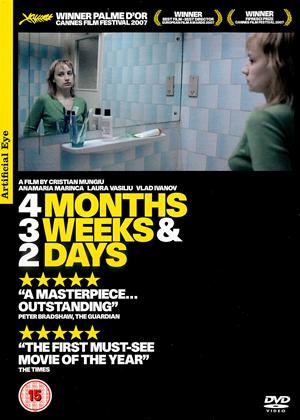 The kind of thing that gives experimental cinema a bad name. - 4 Months, 3 Weeks and 2 Days review by CP Customer

Such double reverse angle cinematography, with whites and reds and blacks and the extra second pause between the camera shake and then the 'oh so effective' realistic conversation.

Whilst the above was probsbly frequently said at Cannes by the jury who had lost any sense of what a good film involves, for the rest of us living in the real world, this movie is not worth watching. It is filled with clever cinematic tricks, but lacks any character realism, any subtlety, any depth, any humour and any value.

A powerful and provoking Romanian film. Set amidst the Communist era, the grip of the state is strong, as is the fear of punishment. Identification papers must be shown everywhere and abortion is illegal, with jail terms handed out for those involved. Apart from the restrictive conditions in which the Romanian people endured, the thing that struck me the most was why these two women were friends in the first place! Gabita really is pathetic and leaves everything to Otilia to organise or she picks up the pieces. As a friend, Otilia goes above and beyond the call of duty. What we take for granted as our rights, choices and expectations in life can be so different from elsewhere in the world. 4 Months, 3 Weeks and 2 Days will not be to the taste of everyone. Yet I find myself now questioning what other Romanian films are out there.

Much-lauded insight into Ceausescu-era Rumania with excellent performances by the two leads. The unremittingly grim portrait of Eastern-bloc existence, with constant surveillance, a rampaging black market and hatchet-faced petty officialdom oppress characters and audience alike, so it’s hardly a fun-filled experience, but the gritty determination of Anamaria Maninca’s character as she deals with all of the above, her whiny pal and her self-obsessed boyfriend are strangely uplifting.

Seeing this for a second time only reinforces appreciation of what a modern classic this film is.

The central scene in which the two young women haggle with the abortionist in a hotel room is simply rivetting.

There are echoes of Alan Clarke in the determined walking and dogged loyalty of Marinca's character. We only see her in extremes of difficulty, but she emerges as a credible and humane creation.

Not an easy watch, but true art needs to challenge in the way this movie does.