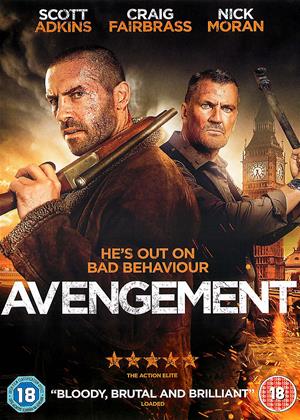 This is really Cain and Abel retold in the East End - on this outing we see mad dog Scott Adkins square-off against his toe-rag criminal brother,(Lincoln (geddit?)), played by the solid and reliable Craig Fairbrass. Cain (Adkins) went to jail for nearly 10 years and has run the gauntlet of daily deadly fights. When he finds out that his brother has sponsored a hit on him he sets about planning a jailbreak. This culminates in him taking Lincoln's gang hostage in a grotty pub HQ. The dialogue in Avengement is poor and the plot predictable, but such is the energy of the fantastic leads and the cool fight scenes (very gory) that this stand head and shoulders above many other low-budget British gangster/action flicks (that usually star Adkins anyway).

This is directed with flair by frequent Adkins collaborator Jesse V Johnson (GREEN STREET 2 / TRIPLE THREAT / ACCIDENT MAN) and it's a fun quickie for fans of basic action. Scott Adkins pushes himself here by trying a bit of character acting on for size (for once) and it's a success. One of the best new DTV actioners to come out of England in recent years.

this is a gangsta, prison type film but set in multiple locations out of prison so keeps it interesting.

great cast and acting. the story is different to the usual which is fresh.

lots of really brutal action and fighting which is pretty non stop so you wont get bored.

if you like films simular to lock stock, green street, snatch, death wish, death sentence then im sure youl enjoy this.

A good Brit crime movie for a change unlike the dreadful Welcome to the Punch and the last Sweeney effort. Gritty with a dark atmosphere, the story uses few locations but ramps up the tension and the brutality. I found it compelling and watchable with fine intense performances all round. Remind me not to get involved with the underworld it isn't healthy!

Not for the fainthearted, it will satisfy lovers of intense drama and action. Much recommended as a surprise package.