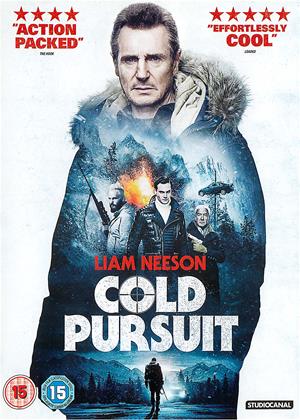 this was so much better than I thought it was going to be. funnier than expected.worth watching for the last minute alone.director's career worth following.

Liam Neeson plays an ex special...... oh no wait a minute nope he is actually just some guy with a kinda regular job, well I didn't see that coming!

I was expecting the usual action/redemption type thing that he is usually in but was pleasantly surprised by this slower paced but interesting movie. There is something about it that just keeps your interest throughout.

Good movie, nothing overly exciting but a good watch.

This is a USA version of In Order Of Disappearance a Scandinavian movie. Exactly the same but the comedy element overplayed somewhat with a few changes; Gang boss is bullied by his ex whereas in the original he knocks her out with a punch; got to have strong women in Hollywood these days. Brutal violence and comedy are strange bedfellows and the original plays it better although directed by the same guy.

An entertaining watch but if you haven't seen it don't bother and go for the original version; more authentic and blends the humour and violence better.

Remember 'The Killing' TV series? Original Danish version best, USA remake not as good but Yanks cannot be bothered with 'foreign' stuff so original with sub titles to much like hard work eh? Same equation here really. Originals are always best, after all they are what prompted a remake in the first place.

Not a patch on the original! - Cold Pursuit review by CS

Having seen the original Norwegian version from 2014 called 'In Order of Disappearance', starring Stellen Skarsgard, which is absolutely brilliant in every way. This comes across as nothing more than a slow paced, pale imitation and I'm not quite sure why they even bothered to remake it when the original is so good? The role suits Liam Neeson very well, and the storyline is very good, but unusually for a Neeson film, this is quite slow, I was expecting a hyper pumped up version of the original and whilst the original is slow paced, it is so well done that doesn't really matter, because the original is such a great strong movie. But this was just boring and so slow to the point that a snail could have out run it! If you want to see this film, I strongly recommend you watch the original instead, which is brilliant and far superior to this hollywood remake!

I suppose I was expecting another taken having read the review

Great action and classic revenge storyline., quite gruesome at times but never unnecessary. Extremely good acting from all characters covering the range of tough, violent and funny, but the absolutely outstanding quality of the film is the stunning, breathtaking scenery and the atmosphere captured through brilliant filming

This is a remake for English speaking audiences of the Norwegian film "In Order of Disppearance" by the original director. The film was set in Kehoe (I have to admit I don't know which country that is in) but it was shot in Canada ,and the Serbian mafia were replaced by native Americans, but otherwise it follows the same plot. The surname of the main character has the same joke on it. I preferred the Norwegian version which I saw first, as the subtle humour was more evident, though they are both played as a straight thriller, the humour comes from the dialogue. The Norwegian one has the advantage of being able to play on cultural differences between the Norwegians, Swedes and Danes as well as between the Scandanavian and the Serb gangsters. This latter translated well into the differences between the newcomers and the natives to the Americas, much like a western.

The whole film starts with a mistake; two friends are taken by gangsters because one of them stole drugs from them. The culprit escapes, so they murder the one they have, unaware that he was innocent. His father, a snow plough driver takes revenge which in turn kicks off a turf war between the two rival drug gangs who had previously agreed to split the territory between them. In both films you get a body count as the deaths mount up, which I thought added to the humour ,unlike one of the reviewers (check out each icon for the cross). The snow plough driver in the original was Stellan Skarsgård and in the remake was Liam Neeson who both portrayed well a gentle family man who normally wouldn't hurt a fly, but takes revenge when his son was wrongly killed. His wife was played by Laura Dern, not Laura Linney.

If you are OK with subtitles then seek out In Order of Disappearance, otherwise this film is an easier watch though I felt it was not quite as good as the original.

Not Liam's best film but true to form and will keep you watching until the end. Lots of shooting and killing so not for the squeamish

but good storyline and keeps you entertained.

I heard about this film, because of Liams little interview confession error. However I'd heard it wasn't the normal sort of film for him and it wasn't. Never seen anything like it, some nice twists and surprising ending. Well worth a watch.

Superb. The sort of film made for Liam Neeson. Very well written, directed & acted. This has gone down as a favourite & it will be watched again for sure. Maybe not for everyone but we found it very entertaining & worth highlighting for others to be aware of & to consider it for a viewing.

I have enjoyed Liam's films in the past and was looking forward to viewing this one. What a disappointment. It was awful.

I gave up hope after 20 mins and turned it off!

Liam Neeson’s angry dad action pictures seem to grow more chaotic by the forgettable titles. Cold Pursuit, thankfully, takes a small step back from his more brazen and action-packed of his thriller outings. Perhaps it seems that way because there’s no scene of him brandishing a blunt weapon like a flaming piece of wood or a guitar to battle his attackers. He does still use construction equipment to send a tree smashing through a car so some of the craziness hasn’t left. In fact, a lot of the zing hasn’t left for a story about messy crimes in a ski resort in Kehoe, Colorado.

Neeson plays Nels Coxman, a snowblower who takes a humble approach to his work. He lives a comfy and cozy lifestyle until his son is found dead from a heroin overdose. This sounds like a mystery for an angry dad to stomp around his snowy town and punch a few shady folks who dabble in drugs. He wanders into clubs and does some punching. He follows some bad guys and guns them down in the snow. Standard Neeson revenge stuff.

Yet it never feels bland, partially from Neeson’s commitment to a believably humble small-town man but mostly from the flair of the setting. Of course, a huge draw for the film is the final boss of drug lord going by the name Trevor "Viking" Calcote (Tom Bateman). He has got to be the most over-the-top yuppie villain I’ve seen in so long I have to wonder if this kind of story took place in the 1990s. He’s a rich, slick-haired, suit-wearing, snarling businessman who absolutely oozes evil. He has an ugly relationship with his ex-wife and treats his son with a strict diet that doesn’t allow for any cookies. When dropping his boy off with his ex-wife, she says that if the boy eats the same exact healthy dish every day as instructed he’ll want to kill himself. Viking seems like he’d prefer it giving how little he feels for his boy.

The film goes about its murders in an almost Coen Brothers style of dark wit, breaking the killings into chapters of crossing names off the list. Some come with bitterness while others are somewhat surreal in their surprise of violence. Most of dark but portrayed in a manner so cold I questioned how much absurdity such a premise is going for. It seems easier to laugh at the over-the-top nature of Neeson’s other performances in the likes of Non-Stop and The Commuter. Within this picture, it’s a trickier tapestry of thriller hi-jinks that dabbles and dares for the smirk in its vicious nature.

Cold Pursuit is a thriller where the messier it gets in its tangled web, the most entertaining it becomes. Tracking who is in what part of the chain of the drug lord scheme is not as interesting as watching their reactions, where no-nonsense Native Americans threaten ditzy secretaries and old-timers with cancer laugh at the threat of hitmen. Cold Pursuit doesn’t have a certain somber nature that makes its a chilling thriller but just enough theatrics to make it a pleasing one if not all that memorable.