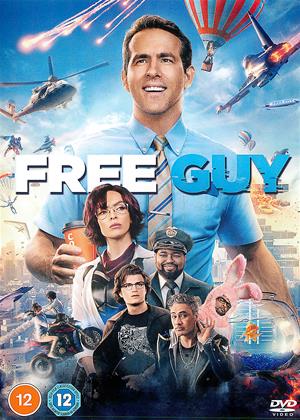 No need to write a review. Simple one of the best movies I've watched in years! Watch it, enjoy it, love it.

Fun movie, like a cross between The Truman Show and Groundhog Day. I suspect having some experience of online video games will help with understanding some of the jokes and references, but it's worth a watch even if you don't. It's actually surprisingly heart warming as well.

Ryan Reynolds, as stylised as ever, plays a background character in a shoot-em-up video game who ups his level so he can do more stuff. So its cgi all the way. Admittedly the cgi is more imaginative than in superhero fare, but interest wears as plot and character become sillier and sillier and the jaunty muzak score palls.

Taking up too much screen time, meanwhile, is the real world of game production, with lots of discussions and explanations about gaming and coding to sit through. Presumably this is 5-star manna from heaven for addicted gamers. Not so much for other viewers. Taika Waititi, still thinking he’s playing Hitler in JoJo Rabbit, is excruciatingly awful as the comedy villain programming boss. When the worst thing he can do is ‘destroy the servers’, you know a script’s struggling to find dramatic interest. For once, the cgi is the main reason to keep watching.

Video games are given a weirdly philosophical edge in Free Guy. That may come as a surprise to those who have been bombarded with the marketing that touts the picture as a mindless action-comedy. I was surprised as well but altogether pleased that a picture brimming with action, explosions, and astute gaming references manages to be more than a mindless Ready Player One clone or even a half-hearted Tron retread.

Ryan Reynolds plays Guy as a familiar archetype of the character trapped in a false utopia. He works at a bank and has a regular routine. He wakes up, eats some generic cereal, orders a coffee, chats with his security guard friend, and then the bank is robbed. It’s a lifestyle he feels is absolutely perfect. Sure, he lives in a world of people robbing banks, assaulting civilians, and high-speed car chases are common but nobody really gets hurt. Anybody who gets seriously hurt will just wake up the next day perfectly fine. It seems like paradise.

Of course, Guy is merely the product of a video game where players jump into a city where they can engage in action and crime. It’s not until he swipes the sunglasses of one of the players when he learns most of the truth about his own existence. Becoming self-aware of the game he occupies, Guy aims to break the cycle and turn his city into more of a law-abiding place by taking on missions more moral for standing up to those assaulted. As with any video game, practice makes perfect and, after much dying, Guy starts becoming a local hero.

Outside the game is a reality of programmers fascinated by this development. Millie (Jodie Comer), a programmer who is trying to prove the video game stole her code, enters into the game to find clues and is fascinated by Guy. At first, she figures Guy is just some clueless newbie who doesn’t understand what he’s doing. It’s only when she delves deeper that she realizes Guy is not only an NPC character but a self-aware one as well. Guy could very well be the key to proving her program was stolen. Helping her out is her partner/potential boyfriend Walter (Joe Keery), currently working as a coder for the game itself. Not helping her out is the greedy and egocentric gaming industry CEO Antwan (Taika Waititi). Acting more as cheering observers for Guy is the streaming community, portrayed in the film by real-life streamers.

Free Guy manages to be more than just the tale of a video game character trying to save his world. Guy actually has some great existentialism questioning when realizing the reality of his world being perceived by a handful of developers and one deceptive CEO who ultimately has the final say in whether or not one person can exist. Such a concept is not as explored as it could, considering it has to share the screen with lots of silliness and explosive action, but it’s still fantastic to see a picture such as this consider such deeper questioning. There’s a brilliant moment between Reynolds and Lil Rel Howery (also a video game character) about what matters most in our existence with surprisingly meaningful reasoning for being.

All that being said, Free Guy is still a very funny film that’s a marvel of special effects. The slapstick humor of Reynolds trying to maneuver his way around a video game world he’s just now realizing is quite amusing. Running into those who are too engaged in their violence or more concerned with their streaming numbers leads to some pretty amusing bits. I also really dug the climax which involves a Hulk version of Reynolds in a scene that is sure to be a major geekgasm moment for references to Captain America, Star Wars, and Portal.

Free Guy is a video game movie that manages to break out of its shell (mostly) and explore something beyond the pixel-perfect replication. It’s funny yet meaningful, action-packed yet romantic, and gorgeous yet insightful. It’s a fantastic picture to ponder for all of the mental meat it serves up while other video game movies seem to be in the paddling pool of existence and technology.