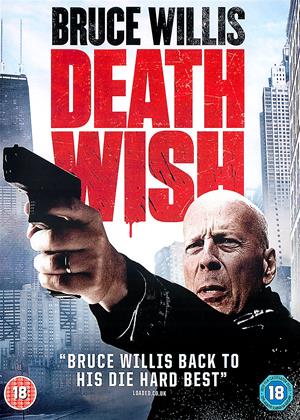 Having always been a fan of Charles Bronson and the original Death Wish films, I thought this played very strong homage to the originals, simply bringing the theme up to date. Slow to start, it starts to move forward and set out the story, slowly building to an, in a way, inevitable but enjoyable climax. Nothing new here, much of it has been done before so many times. However the way this takes the original and updates it is very well done and I thought Bruce played the part well. In all I thought it was a very enjoyable film to watch. yes it does play on and explore some sensitive subject matter, but irrelevant of recent events in America, this theme has been played out for millennia and really is not new at all.

Not sure what big differences Eli Roth could have made to the lets face it average Michael Winner's 1974 version. This time round we have an unconvincing Bruce Willis (particularly in the emotional scenes) as Doctor Paul Kersey who turns into the 'reaper' of Chicago when his wife is murdered in her own home after a bodged burglary and daughter put into a coma goes on to extract revenge on the assailants and other wrong doer's. Not much really to write home about script wise other than a pair of cops who seem to do the entire police work of every homicide in Chicago whilst the climax is particularly cringe worthy as well as the over the top scenes portrayed towards Kersey's daughter Jordan makes it a Missable film for me.

NO REALLY, STUFF OF NIGHTMARES WHEN YOUR FAMILY GETS ASSAULTED, OR NOT?! DO WE ALWAYS NEED FULL ACTION AND SO ON TO BELIEVE ALL - IT'S HARD ENOUGH AND VIOLENT. ACTUALLY QUITE A GOOD FILM. DON'T COMPARE TO THE PAST, THAT WOULD BE A MISTAKE.....ALSWAYS IS.

Enough to make Bronson turn in his grave. Plot poor and with little emotion from Willis to events. Film demands some feeling and sensitivity amongst the violence and Willis is the wrong actor for such a part

This film was really disappointing, the acting was poor, the script was poor and Bruce Willis well, never seen him act like that before he is normally worth watching in any film but not anymore !

Simple rip off of the name to get sales and the use of Willis to do the same, makes me want to go into film making as even I could come up with a film 10 times better than this.....just bad, if I were you watch something else :)

Outstanding motion picture entertainment. Bruce Willis better than I've seen him in years. Kick back, watch this picture and enjoy.

Started ok bringing the story up to date in the mobile phone/camera and CCTV age. Not so easy going around shooting people with electronic eyes everywhere. It quickly becomes a search for the men who assault his family and so ends up a weak thriller with shoot outs. An opportunity to analyse the Vigilante impact on the public and police, the psychology behind it. The movie fails to take the subject seriously enough and so the original is still the best bet if you haven't seen it.

I love the original Charles Bronson movie & was worried this would be a waste of time but Willis has taken Paul Kearsey & simply modernised him. No over the top performances just a straight forward reboot. Very gory in parts but it doesn't diminish the film.

Eli Roth’s Death Wish is an ill-timed remake in the era of gun control becoming a more heated topic. It had originally been postponed from its original release date due to the Vegas shooting, but now it unfortunately hits theaters not long after the Florida shooting. Still, I’ll take the film for what it’s worth, but it’s a little hard to keep your politics out of preference with a film such as this. While the political leaning is never outright stated in a long-winded speech or bold statement, Death Wish wears its pro-gun intentions like a tattoo, flexing it with every shot fired.

Bruce Willis now plays the role of Paul, having changed his profession to that of a surgeon and his face to not feature a mustache. Things are not looking good in his home of Chicago where gun violence continues to ramp up with no end in sight. But when he goes home, everything is far more cheery. His wife is finishing a degree and his daughter has gotten accepted into the New York college she wanted. They’re a loving family that have so much fun that the movie makes it blatantly clear something real horrible is going to happen to them. Sure enough, the wife is murdered and the daughter assaulted into a coma after punks break into their house. Anyone who has seen the 1974 Death Wish is aware of this story, but I’ll give Eli Roth credit for ramping down the creepy rape the original scene was known for.

The placement of Paul as a surgeon is also a wise choice, leading to a heartbreaking scene where Paul is working and overhears two women being brought into the emergency room over the speaker. Or at least it would be heartbreaking if Willis could show some emotion. For a handful of scenes where he is required to be forlorn, Willis struggles to embody that persona of a depressed man dealing with death. Let’s just say he’s much more at home playing a snarky action hero. And the movie makes the smart call to go this route, as Paul’s revenge spree on the streets of Chicago turns into a bombastic bloodbath. Bullets pierce body parts, necks are snapped, and brains will spill. Yep, that’s an Eli Roth film for sure.

When the film is going for the more laughable and gruesome scenes of Willis hunting down punks on the street, the film finds its groove of being an ultra-violent bonanza. But then all the fun has to be ruined by the script’s odd need to force the darkness of the situation and the real-world issues. This is where the entertainment value becomes clunky, as though footage of real gang violence were spliced in with cartoon violence. Every now and then the script will bring an important question of copycat vigilantism and how vigilance is a slippery slope, only to be swept under the rug to get back to the action. Why even bring it up then? It’s very clear this film can’t make any points about gun violence past its eye-for-an-eye mentality that’s fun for entertainment, but not for an actual debate.

And if you really don’t dig the NRA right now, this is certainly not the film for you. Death Wish LOVES guns, to the point of amping up the gun store with a perky blonde that will cheerfully hand you a sign-up form and dismiss the gun safety classes as easy formalities. Paul’s vigilantism has no consequences, or at least none that he cares to address. When he finally kills the last bad guy who murdered his wife, the city is safer somehow after Paul decided to become a gun-toting superhero. And the insertion of Willis’ snarky jokes on his goofy kill frenzy feel like they’re from an entirely different film. This is no Taken, a film that managed to find a balance of tongue-and-cheek and real-world distress. This film is more like a sloppy stitching of a sorrowful tale of losing a loved one and a joke-cracking comedy picture of blood and bullets.

Death Wish is a film that I could really only see appealing to aged Middle-American that have a dream of America being like the wild west, where one good man can go out and kill some gangsters and everything will be solved. It has all the traits: an emotionless lead who becomes the hero, a hard-nosed detective that thinks gluten-free foods are for losers, and a soundtrack of classic rock to make any out-of-touch old-timer believe its 1979. You know which audience this is for. And I would’ve been with them if only the film didn’t feel the need to dance around the subject of what to be done with gun violence, dipping its toes in just enough so that it relates to events of the real world, but doesn’t want to say anything about them. I’m almost thankful the barrel jams before any clumsy pro-gun rant can be made, but the fact that it even tried to fire in the first place doesn’t make it any better.