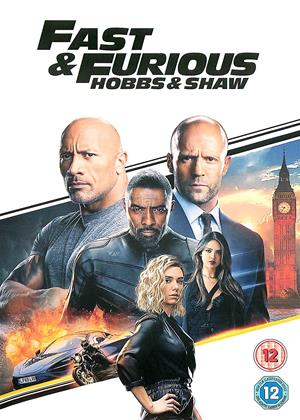 Reviews (5) of Fast and Furious: Hobbs and Shaw

Woeful - Fast and Furious: Hobbs and Shaw review by Alphaville

A franchise spin-off for fanboys only. Cartoonish biffing and bashing, contrived messy over-edited action scenes, pseudo-cool funk and rap score, pointless talkie scenes to space out the runtime to 130 minutes, schoolboy dialogue. There are even a few car cashes (now that’s novel) and a vomit-inducing ditty over the end-credits. In other words, it’s as unwatchable as the main franchise.

I keep reading reviews about the Fast and Furious films, most along the lines of "Turn your brain off and enjoy it." Not a problem for me since I don't have a brain anyway. Reviews are superfluous with this franchise; you know more or less what you are going to get. The plot here seems almost relevant which concerns the fight for a deadly virus, but in this case it isn't the coronavirus. Aside from the impossible action scenes, some of the humour is a bit shaky, and the two main leads squabbling and hurling insults wore a bit thin. Nice to see Vanessa Kirby do some action stuff (check her out in a more serious film, Mr. Jones), and Idris Elba as a determined terminator. There's even a well worn message that humans are better than machines. Sure, this is silly, cartoonish, etc, etc... but I would sooner watch this than Downtown Abbey.

So awsome - Fast and Furious: Hobbs and Shaw review by EG

Brits get jumping about. - Fast and Furious: Hobbs and Shaw review by NC

Good to see some funds coming to UK from US blockbusters. Shame cannot fund films fully in UK anyway, as we have so many desirable/credible actors.

Another jumping about bish bosh film. Is flaky same as the others, but is mindless entertainment enjoyed by most............bit of humour, masses of death and mayhem.....

This is basically another Fast & Furious film but with only the fun characters and clearly the actors are having a good time not having Vin Diesel suck all the joy out of the movie. The action sequences are over the top and good fun, it won't last long in the memory but fun at the time.

Fast & Furious Presents: Hobbs and Shaw is the first spin-off of the franchise that may strip away the ensemble casting but still carries all the hallmarks we’ve come to expect from the Fast & Furious movies. It’s still big, loud, dumb, and, ultimately, still about family. While the format has grown a bit long in the tooth, Hobbs and Shaw does showcase that there’s still some charms to this saga of big stunts and high-octane action.

The formula comes about as advertised if not from the marketing than the previous F&F films that have built up the opposites attract aspect of the two leads. Hobbs (Dwayne Johnson) is a special agent that has a sunny side to his life of foiling terrorists and coming home to his smart daughter. Shaw (Jason Statham), on the other hand, is on the opposite end of the spectrum as a sometimes good guy who finds himself getting into a lot of trouble with the law. They from enemies in Furious 7 to a mismatched pair in Fate of the Furious. Now they’re a proper duo in Hobbs and Shaw. I’m tempted to say they’re a couple if only for the amount insults they lob at each that involve shoving things up each other’s butts.

The plot? Um, does it matter? There is one but it’s a thin veneer of cyborg terrorists that isn’t exactly the most inspired of evil villains. Idris Elba plays a cybernetically enhanced assassin, hired by a mysterious shadow corporation that wants to restructure humanity into cyborgs for survival. Oh, and they also control the media, too, so we can have that brilliant moment when Hobbs and Shaw are labeled as wanted men. Elba is seeking a virus that will wipe out the weak of Earth because that’s apparently another goal of this organization. That virus lies inside Shaw’s sister of an MI6 agent, Hattie (Vanessa Kirby).

One problem with this format is that since there isn’t an ensemble at play here, Johnson and Statham need to take center stage and they need to carry the film. They mostly do but it’s thanks to their charisma alone. There isn’t exactly a lot of extra character development from these two, considering they spend most of the time insulting each other when they’re not jumping into explosive action and fight sequences. They’re still likable but, wow, do they get so furious with their rivalry it reaches a point where I honestly thought they’d start making out with each other. Tell me that wouldn’t be the most exciting moment in this action picture. Of course, since that won’t happen in a film obviously aiming more for machismo, Kirby comes in as a love interest for Johnson, almost inexplicably.

To call the film dumb is pointless. The franchise has been playing off this absurdity for years and it still has some of that great energy here. Highlights include a fast chase down European streets with cars and motorcycles, an exploding powerplant, a scaling downward on a skyscraper, and, perhaps the most bombastic scene, a fight of blunt weapons and helicopters in Samoa. These sequences all have their moments of fun but about as fun as we’ve come to expect from these pictures. They’re at least colorful enough to tantalize the eyes that I don’t even mind the weird skip in weather, where the Somoa fight begins at night and then, in less than 20 minutes, it’s a bright day. At the end of the day, it still looks good.

Hobbs and Shaw have a pleasing enough buddy dynamic to keep fans of F&F occupied until the next sequel, but it doesn’t exactly make any changes either. And after hearing so much rival talk between the two heroes, I can’t wait to get back to the F&F movies themselves.