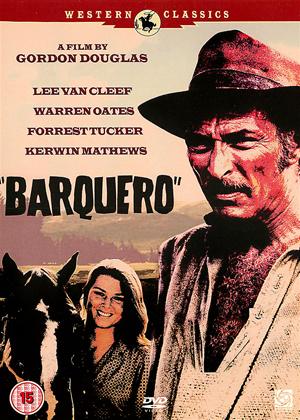 Who pays the ferryman? - Barquero review by Count Otto Black

Spaghetti westerns mostly don't work if they aren't made by Italians. However, in this case, the incredibly eclectic director of everything from giant ant classic "Them!" to the shagtastic "In Like Flint" by way of Bela Lugosi comedy "Zombies On Broadway" and a film starring Oliver Hardy and an elephant almost pulls it off. The trick is to play it absolutely straight, no matter how insanely stupid and ultra-violent the subject matter may be, and this is a good example of such an approach. It's not the only western in which the hero becomes the reluctant savior of a small town, but it's one of the very few indeed in which the "hero" really, truly doesn't give a shit.

A word of warning: any militant feminists out there may want to throw furniture through all available walls at certain moments in this film. Though to be fair, I cannot off-hand think of any other movie in which Lee Van Cleef is seriously supposed to be the sexiest man on the planet. I think you all get the general idea. This is a spaghetti western spoof, but it's a pretty good one, if you don't mind a wee bit of political incorrectness. I certainly don't, therefore I object not at all to the nods to such films as "For a Few Dollars More", or indeed the less famous but well worth seeking out Budd Boetticher westerns, many of which involved Randolph Scott, that built a bridge between these two genres.

Bad stuff happens, and bad yet reluctantly good people reluctantly sort it all out. As post-spaghetti westerns go, it's not at all bad. Certainly it does exactly what it says on the tin.