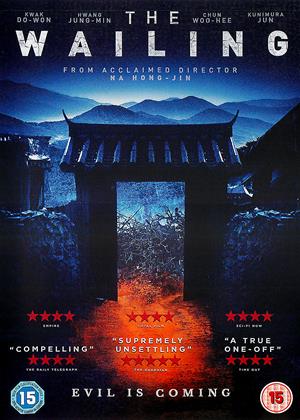 Reviews (4) of The Wailing

Hong-Jin Na’s third film isn’t quite as thrilling as his first two (The Chaser, Yellow Sea) but he’s a director to watch. He begins his films in such an oblique way that you’re never quite sure what genre you’re watching, never mind what’s going on. Comedy? Detective story? Horror? The story soon focusses on defiantly non-Hollywood leasding man Do-Won Kwak, overweight and hopeless as a bewildered police officer. You’ll soon be rooting for him.

Once his daughter becomes ‘possessed’ the film develops an increasing sense of dread. Na wanted to make a thriller that ratchets up the tension without resorting to violence, but there are some wild and exciting scenes here, some of which are beautifully shot in rainstorms in the South Korean mountains.

Who’s the mysterious Japanese man who feeds on raw deer carcass in the woods? Who’s the beautiful young woman who watches him? Who’s the cool-dude shaman and his terrifying exorcisms? And is that a zombie with a rake in his head?

As usual with Na, there’s no Hollywood formula here to tell you what’s coming next. As tension grows, expect the unexpected. You’ll be happy to go along for the ride.

Shall I state the obvious? At 156 minutes, ‘The Wailing’ is very long. If it was split down the middle into two chapters, that would at least allow a breather in between acts. Alright? I’ve got that off my chest, so we can move on. Because ‘The Wailing’ is excellent. How is it that this modestly budgeted South Korean horror film, that features only occasional special effects and a cast of actors of varied ages (as opposed to predominantly young and pretty) shows up obscenely financed mainstream Hollywood output as being tired, CGI-reliant and shallow? Perhaps for precisely those reasons.

Kwak Do-won is excellent as Jong-goo, a police officer investigating a series of outbreaks of a mysterious wasting disease in and around his village. Various scenes of violently possessed and afflicted characters illustrate this. When the malady appears to affect his daughter Hyo-jinn, he sees the progression of the disease first-hand. Kim Hwan-hee is a revelation as the placid, loving daughter slowly transformed into a shrieking, snarling fiend – afraid of the shaman Il-gwang (Hwang Jung-min) brought in to exorcise her, and snarling accusatory curses at the father who is trying to save her.

“When you go fishing, you don’t know what you’ll catch. ‘He’s’ just fishing …”, to slightly misquote the reply to Jong-goo’s wearied wonderings as to why his daughter should be afflicted. As to who ‘he’ is – we have to assume the worst. And yet even her transformation isn’t the worst we see.

Jun Kunimura plays the morose hermit who may or may not be behind the witchery, and yet when Jong-goo and Il-gwang dispose of him, the shaman feels that they have done away with the wrong person …

Evocative and effective use is made of location, and especially the elements. On occasions, the atmosphere looks extremely cold, and when it rains, it comes down in torrents. Director Na Hong-jin conjures up a very convincing sense of violent evil within a small community. My only slight issue with ‘The Wailing’ is that, after all that time, there is no real ending – which is something I usually don’t mind at all, but felt this could perhaps have done with some kind of pay-off. Perhaps a sequel is a possibility …

We have time to get to know the characters, watch them grow and share with them their harrowing experiences. Productions like this, when they come along, almost re-write the structure of telling an effective story – so much so that, while over two-and-a-half hours is a long time to concentrate on a film, you certainly aren’t in any hurry for it to end.

What? - The Wailing review by KC

Must disagree with the other reviewers who obviously enjoyed this more than I did. It starts off great and does indeed draw you in but then it slowly, oh so slowly, slides into utter incomprehensibility, until by the end you're just left thinking WTF and feeling decidedly short changed, there are definitely better ways to pass 2.5hrs.

Some people will find The Wailing terrifying of that I have no doubt. Tonally we start off with gruesome death, although gruesome is mainly in the mind, the actual victims are in shadow, there are blood sprays seen up the walls but for overall grue there really is not as much as you believe there is. Always a good sign when a filmmaker is confident enough of their own storyteller to let the viewer’s imagination do the heavy lifting. But what we start off with is a funny film. I can honestly say the first third of the film is definitely comedic but in a situation way rather than comedy characters. Jong-goo, superbly played by Do-won Kwak, is at best an average cop, bumbling at times, not punctual, the antithesis of the usual protagonists in these types of films that are either heroic or tragic or all parts between. For me this grabbed my attention immediately.

As the film progresses so does the development of Jong-goo whose foolish ideas, bravado and impulsive decisions become less comic and more tragic and serious. There are still flashes of almost slapstick humour as one character is struck by lightning and staggers about, a shaman has more showman and charlatan about him and preens around but the tone is not completely lost. Afterall, if you are honest, life can be like that, one minute you are in a Charlies Chaplin film, the next it is a murder film. A no point are the murders, violent events, passed off with quirky or clever remark.

It is difficult to describe too much more of the film and story without ruining it for a first-time viewer, suffice to say the ending lays it all on the line and seems to be straight forward and easy to comprehend, although if you think back through the previous two or so hours, maybe not so much. This is the trick of director Na Hong-jin I honestly believe he wants you to interpret what you have seen, what you take away from it is personal to you. Is it a metaphor on religion, tradition, or on the difference between different communities or how you view people, how you trust them, the trust in traditional superstition or logic? It can be and I believe is all of these things but is overall a good horror film.

The cinematography is beautiful with the claustrophobic and chaotic village presented as such then beautiful almost prehistoric forests magnificently portrayed in verdant green crowned in soft white mists.

If anything detracts from this magnificent horror film perhaps the running time could have been snipped back a bit. The middle third was baggy, where the film flips over from comedic to horrific, it felt a bit clunky and the friends traipsing around the forest, getting involved in a fight with…. well I will not reveal it…. was not obviously necessary to the plot and if it had been removed entirely would have mad not difference to the story. Some of the acting seemed a bit over the top and hysterical but whether this is quirk of the genre or origin of the film I am not expert enough to know. These are only small quibbles though and all the actors acquitted themselves favourable.

If you want to watch something different, something that might make you think what they heck you have just seen, then as someone who is definitely not a horror-film aficionado I recommend The Wailing highly.

If this film has done anything it has made me want to seek out Na Hong-jin’s back catalogue, small as it is.

The Wailing (aka Goksung) review by Adrijan Arsovski - Cinema Paradiso

An utterly and truly terrifying experience, The Wailing will engrave the scary into your mind long after you’ll forget you even watched it in the first place. There is also something deeply sinister in Asian horrors not yet emulated among their North American counterparts: whether it’ll be an uncanny child, an ambivalent twist or just plain terror lurking from within – it just keeps the audience involved even after some of the characters are killed off. Well, The Wailing has all of that, and more.

For religious people yearning to be scared, this feature will work beyond anything they’ve ever witnessed before. From the opening credits, it becomes clear that director Hong-jin Na’s piece will feature stuff from the Bible not yet tackled by American contemporary cinema (attempts have been made by recent Australian surprise The Babadook). And not only plain symbolism: The Wailing draws its essence from religion (and some mythology among the way), but cares to explain everything by employing the ‘show, don’t tell’ rule most features nowadays tend to skip.

In this regard, The Wailing works very well and completes is objective to scare fully and successfully.

The film is gritty and contains a strong sense of urgency that, despite the jokingly unaware characters that become tragic toward the end, feels as believable as real life itself. Somewhere along the middle however its tonal balance changes for the implausible, but when you come to better think of it: is it really?

Imagine you’re an everyday, professional bloke who’s stuck in a haunted village that produces dire consequences for its residents every day or two. Now, imagine you’re just there to try and conduct a professional duty because the law-abiding citizen such as you doesn’t know any different. Then, seemingly out of nowhere: the supernatural hits and shifts the whole balance in the village toward chaos. What would you do?

One thing is sure: knowing human psychology, you’ll either go crazy, or you’ll start making rash decisions that, from an outsider’s perspective – would look funny as whole hell. Point is, this is what the slapstick part of The Wailing is trying to explain, and nothing more.

Another thing to keep in mind is, The Wailing clocks in at 2 hours and 35 minutes, and at times this could mean it’s just dragging for too long. But, who cares about runtime when everything falls into place in the movie’s third and final act?

The Wailing also features some of the best darn acting my eyes have ever seen. The actors’ faces are equally innocent and terrified and nail the film’s believability quite accurately. Atmosphere is amazing and music is as eerie as your creepy neighbor next door.

Ultimately, to fully grasp the ambiance The Wailing portrays, you have to be familiar with Korean mythology, culture and some pagan rites as practiced by indigenous Korean shamans.

Without knowing these prerequisites however, you’ll be equally terrified as soon as the credits roll.