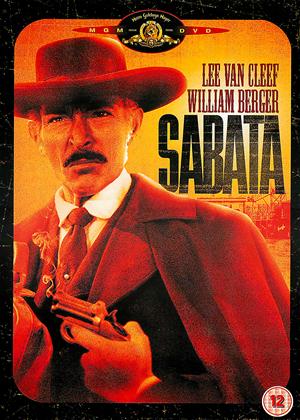 The first great spaghetti western archetype was that guy played by Clint Eastwood who, since he didn't officially have a name, was only identifiable if Clint Eastwood played him, therefore he was soon supplanted as the all-purpose scruffy but deadly Mysterious Stranger by Django, who went on to appear in about 50 films, played by at least 20 different people. The second was Eastwood's co-star in "For A Few Dollars More", Colonel Douglas Mortimer, the black-clad Southern gentleman with all those gimmicky weapons played by Lee Van Cleef. Here we see him starting to metamorphose into a more versatile stereotype, still played by Lee Van Cleef, but now called Sabata, and conveniently deprived of any cumbersome backstory. Lee Van Cleef would go on to play Sabata in one more film, and Yul Brynner would step in for his third outing, before he turned into another guy called Sartana who was essentially the same person only a lot younger, and could be played by any generically handsome Italian who happened to be available. One time he even met Django.

This film has almost no plot whatsoever. Some guy who can do things other characters flat out state to be impossible moments before he does them turns up out of nowhere and copes with a problem that has absolutely nothing to do with him for no apparent reason. There's a lot of money involved, but well before the end you'll have forgotten why. And although it's not explicitly a comedy, much of what happens is so absurd that it might as well be, including the unnecessary inclusion of several acrobats just because spaghetti westerns were obsessed with them for reasons nobody has ever figured out. Several characters have incredibly strange hairstyles - another inexplicable feature of many spaghetti westerns - and that fat bloke with rectangular glasses whose entire career consisted of playing evil cowardly bankers in spaghetti westerns lurks in the background looking sweaty and terrified. So it's pretty much par for the course.

But it's a lot of fun. The characters may be flat, but they very seldom pause for long enough for us to worry about it. The comedy doesn't get in the way of proper gunfights where numerous people actually die, and the nonsensical plot zips along so fast that you soon stop caring that you don't have a clue what anyone's motive is for anything, or how ludicrously impractical the hero's handgun is. You even stop noticing all those bizarre hairstyles after a while, apart from that guy with the banjo of course. If you switch off the logical part of your brain you'll enjoy this. If you don't, it'll hurt. So just go with the flow. By the way, whoever wrote the official blurb on this site claiming that this film "gallops to a final, spectacular shootout that's one of the biggest gunfights ever seen in the movies" presumably looked at the DVD cover, observed that Lee Van Cleef had a gun, and made a wild guess. Sadly they were wrong.

I am a fan of westerns, especially the better spaghetti westerns, but this is truly awful - devoid of a real story or plot, any back story revelation and any real acting,and with the ubiquitous shriek of a bullet being fired from every gun in the film, as per every spaghetti western. I can only surmise that Lee Van Cleef needed the money for some reason to star in this