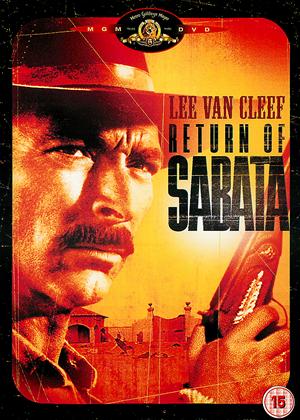 Reviews (1) of Return of Sabata

I don't know who writes these synopses, but the one given here seems to be of a completely different film. This is actually a peculiar comedy that mostly follows the trend for sequels to light-hearted spaghetti westerns to get even lighter of heart, sometimes reducing the body-count to zero. The trouble is, it can't quite make up its mind whether it wants to, resulting in a disconcerting unevenness of tone that ultimately ruins it.

Sabata, "the only invincible man in the countryside", as the excruciatingly dreadful theme-song helpfully informs us, is on the trail of "something big", which involves a lot of money we glimpse briefly, and a woman who gets murdered for knowing too much. As comedies go, this is very dark indeed, but hardly has the story begun when it's shoved to one side and barely mention at all for ages. Instead, Sabata, who has more gadgets than Batman and even less chance of losing a fight, and at one point seems to be literally indestructible, indulges in tediously unfunny repartee with annoying people who can't act, defeats numerous baddies in absurdly contrived non-lethal ways so easily that he looks rather smug most of the time, and the plot manages to simultaneously become extremely confusing and stop dead. Also, circus performers bounce around on trampolines a lot because in films like this they always do, and there are so many undersized peculiarly-shaped pistols no self-respecting gunslinger would carry unless the store was all out of proper guns that it comes across as incredibly strange product placement.

And then, more than halfway through, suddenly it's grimdark time again! Sabata abruptly starts ruthlessly gunning downs his foes, the genuinely horrible baddie is in the film properly instead of hanging about in the background because he's at odds with the zaniness of everyone else, all that stuff involving the murdered girl everybody had completely forgotten about resurfaces, and the story finally starts going somewhere. If the whole film was like the prologue and the second act, it would be a minor classic. Unfortunately it's half a good film with half a very bad film in a completely different style grafted onto it; I suspect the studio may have decided it was too gruesome and not wacky enough at a late stage in production. It has its moments, but there's also way too much of Lee Van Cleef being casually unbeatable while idiots pull faces and spout dismally unfunny comic dialogue.

For a similar but better film that consistently maintains its dark tone throughout, see "Adios, Sabata", an unrelated movie which was hastily turned into a sequel to this one by redubbing the hero's name.