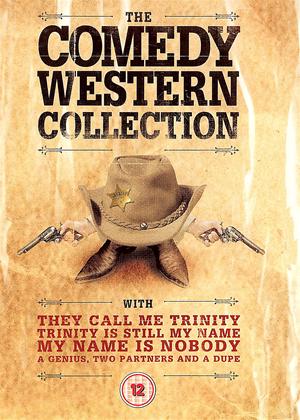 Rent other films like A Genius, Two Partners and a Dupe

Sign up
They Call Me Trinity / Trinity is Still My Name

Sign up
Who Finds a Friend Finds a Treasure

Reviews (1) of A Genius, Two Partners and a Dupe

First of all, Henry Fonda isn't in this film; there seems to have been some confusion with "My Name Is Nobody" (to which the German print of this movie pretends to be a sequel), in which he did indeed co-star with Terence Hill, aka Mario Girotti, a blond, fair-skinned Italian who spent most of his career pretending to be American thanks to the miracle of bad dubbing. Talking of bad dubbing, in this movie it really is atrocious even by spaghetti western standards. Almost everybody ends up with an incredibly annoying cartoonishly silly voice, notably Miou-Miou, who sounds like Betty Boop, and Klaus Kinski, utterly wasted in a ridiculous cameo. Even Patrick McGoohan has a silly voice, despite the fact that he seems to be doing his own dubbing. I suppose he just wanted to fit in with the general tone.

Terence Hill, never a particularly good actor, gets by in most of the many comedy westerns he appears in thanks partly to his good looks, but mostly due to the manic energy he imparts to the numerous slapstick fight scenes, usually featuring bizarre acrobatics. Unfortunately this film has far too little daft action, and way too much supposedly comic repartee between people who mostly can't act (Hill's co-star is some guy who was in hardly anything else, for reasons which rapidly become obvious), dubbed by even worse actors trying to sound funny. The one extended acrobatic slapstick sequence serves literally no purpose whatsoever; our hero breaks out of jail, inexplicably sticks around for a while to cause total mayhem in ridiculous ways for no reason at all, and then escapes like he was going to in the first place, before he suddenly had to pointlessly clown around, be shot at, and blow irrelevant things up because the movie was getting a bit boring.

The whole film has the same problem. The prologue seems to promise us the kind of tightly directed and surprisingly dark comedy western you'd expect from the director responsible for the superb "A Bullet For The General", but has almost nothing to do with the rest of the film. The hero's literally supernatural speed at drawing a gun (a gag Mel Brooks would steal in "Blazing Saddles" and use far better) is established as if it's going to matter, and then forgotten about completely. Minor characters suffer surprisingly nasty deaths while far worse people are merely humiliated in cartoonish ways. And the double-triple-whatever-cross that drives the plot never really makes a lick of sense, even after it's all explained at the end. The whole thing's a disjointed mess that struggles to find a consistent tone.

And worst of all, the horribly intrusive music, which frequently sounds like a grotesque parody of Ennio Morricone, is actually by Ennio Morricone, who obviously took the money and ran. The one scene in which he manages to bestir himself to give us a touch of the old magic not only sounds like a lazy pastiche of his earlier classic film scores, but for some reason also plagiarizes, of all people, Beethoven! Very disappointing. See instead the same director's "A Bullet For The General", which isn't that dissimilar in a lot of ways, apart from not being a comedy, being infinitely better in just about all respects, and using Klaus Kinski appropriately, as opposed to having him say "ow, my balls!" in somebody else's voice.