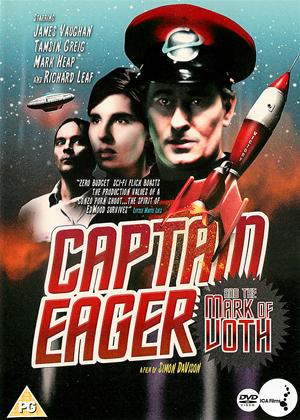 Rent other films like Captain Eager and the Mark of Voth

Reviews (1) of Captain Eager and the Mark of Voth

This is one of the very worst films I've ever seen! And I've seen "Santa Claus Conquers The Martians". When I say it makes "Plan 9 From Outer Space" look like a masterpiece, I mean that literally, because at least Ed Wood was trying, however ineptly, to make a good film. What we have here is a first (and presumably last) time director who spells his surname "DaVison" because "Davison" isn't pretentious enough making a terrible movie on purpose in the belief that "so bad it's good" is a universal rule, without stopping to think that there might be such a thing as "so bad it's just bloody awful".

This film is aimed squarely at those annoying kidults who pretend to enjoy watching very old children's TV shows ironically. Some pretty big names in British TV comedy feature prominently in the cast (Mr. DaVison must be a whole lot better at talking people into doing ill-advised things than he is at making movies), and they seem to be doing their best, but since the script contains very little that's identifiable as a joke, they have almost nothing to work with. The best joke in the entire film is that one of the characters is nicknamed "Scrutty". Seriously, that's DaVison's idea of side-splitting hilarity! The publicity material places considerable emphasis on "Scamp The Rocket Dog", who turns out to be an ordinary dog in a cardboard spacesuit, appears onscreen for about five seconds, and has nothing to do with anything. Much is also made of a character called "Nurse Boobalicious" who doesn't seem to be in the film at all. This should give you some idea of how feeble the actual content of the movie is.

Every shot looks cheap and ugly because it's meant to, sometimes to the point where it's hard to see what's going on. The "plot" is deliberately confusing and nonsensical, but at the same time played mostly straight, so it's neither interesting nor funny, and is often incomprehensible. There's just about enough material here for a five-minute TV sketch, but even then it would look desperately weak next to Pete & Dud's "SuperThunderStingCar" Gerry Anderson spoof on "Not Only But Also" fifty years ago, or even Spike Milligan's gleefully ramshackle "Star Trek" parody in which a bunch of idiots pretend the upper deck of a London bus is the bridge of the starship Enterprise. Eight years before DaVison coiled out this woeful excuse for a movie, Larry Blamire (who, strangely, does not have to spell his surname "BlaMire" to show people he's a proper artist and everything) made "The Lost Skeleton Of Cadavera", which is precisely the kind of thing DaVison is attempting to do here, only it works a thousand times better, possibly because Larry Blamire knows how to write bad dialogue in such a way that it's funny, and doesn't have a mental age of twelve.

This film has literally nothing going for it whatsoever except that it's inoffensive, which in comparison with other dismally unfunny recent British comedies puts it marginally ahead of "The Fat Slags" and "The Sex Lives Of The Potato Men". In all other respects it makes "Howard The Duck" look like "Star Wars". Avoid like the Vulcan Death Grip!