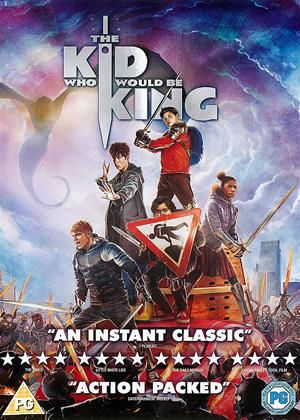 Rent other films like The Kid Who Would Be King

Reviews (3) of The Kid Who Would Be King

great film - The Kid Who Would Be King review by ET

really enjoyed this fantasy film. Louis Serkis clearly takes after his Dad with his acting talent. A great modern take on the King Arthur and Excaliber legend.

Abysmal! - The Kid Who Would Be King review by DB

Don't wish to be harsh but this film was truly terrible. The script was poorly written with lots of explanation exposition, the 'acting' was non-existent and the story itself was plodding, predictable and offered no surprises at all. I couldn't recommend this in any way, shape or form.

Enjoyable romp - The Kid Who Would Be King review by JamieC

I have to admit I knew nothing about this film before it arrived and was a bit ho-hum about watching it, but I'm glad I did. OK the story is obviously ridiculous, but the film is fun and the special effects are very well done, I'm guessing it's aimed squarely at kids (which I'm not..) and for me some things would scare me if I were early teens (or younger!). The young actors are very good, and Louis looks so much like his dad! If you have slightly elder kids they'd enjoy it and you probably would too if you like fantasy type films, give it a watch.

I can’t watch a film like The Kid Who Would Be King and not feel envious of the kids who grow up with such films. Had this movie been released when I was a kid, I would have watched it dozens of times on VHS. Because unlike a lot of pictures that attempt to weave family comedy with epic adventure, this one is built is primarily for the 8-12 year olds of the audience. No adult in-jokes, no subtle theme to the plotting, and not much questioning of how a boy came to fight demons trying to take over the world. It’s kids only and I can’t help but marvel at a film willing to be that direct while still harboring a positive message and keen special effects.

After an amazingly animated prologue on the legend of King Arthur, we’re introduced to the modern day kid of Alex. He’s a plucky 12-year-old that tries to do what’s right and stand up to bullies but the fight is becoming a harder one. His best friend Bedders is constantly harassed by the bigger kids of Lance and Kay, leading to Alex taking more beatings and the school despising his attempts to fight back. Feeling helpless against bullies who ruin his pride and homework, it seems as though there are no more heroes in the world, especially with the global crisis of doom and gloom in the background. Don’t worry, there’s no blatant political statement about the heated Brexit state but it does brilliantly incorporate the tone in the air the way a 1980s movie always had a twinge of doomsday for the cold war in the background.

With the world in despair, now is the opportune moment for Morgana le Fay (Rebecca Ferguson) to ascend from the depths of hell and take over the planet amid a solar eclipse. Informing Alex of the coming fall of man is the mighty wizard Merlin, played sometimes by Angus Imrie, other times by Patrick Stewart, and an owl everywhere in between. While it was fun watching Stewart prattle on about English lore in a Led Zeppelin T-shirt, Imrie is a real hoot as a wise teenage Merlin. He steals every scene with his razor wit, honest delivery of silly lines, and his amazing abilities to conjure spells with tricky hand movements. Most hilarious is that Merlin can only maintain this youthful performance with a certain set of ingredients that just happen to be found in soda, ice cream, and fried chicken, leading to one of the weirdest smoothies ever made.

Alex takes to the adventure quick when demonic forces start targeting him, swinging swords aflame with intent to kill. He’ll soon pick up the sword and begin knighting others to join in him in his quest of stopping Morgana. The quest itself isn’t a particularly original one but it does serve its purpose well. There are plenty of chases, fighting of undead forces, sword play, and noble speeches of fighting for what’s right. The highlight is by far the final battle at school with all kids warding off Morgana’s forces, all the students in armor and fighting off evil while skipping classes.

The Kid Who Would Be King offers no major surprises and makes its message heard from the mountain tops. But there’s an admirable effort behind its assembly that makes the type of fantasy I wish there were more of at the cinema. I recently read an article that the rather low box office for the film was due to kids just not being interested in King Arthur. Whatever the reasoning, I can say for certain that after leaving the press screening, I heard a number of kids saying they wanted to see more films like that. So while the film may not be among the likes of The Lord of the Rings or Labyrinth, it will does have the power to make kids go seek those films out. And that’s enough for me to smile at the film as an easement into more fantasy movies.