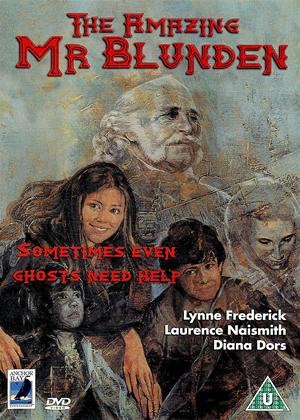 Reviews (1) of The Amazing Mr. Blunden

The Amazing Mr Blunden is a sweet-sad (but not entirely bittersweet), family-friendly, time-travelling ghost story set in 1818 and 1918. It's made by the late, great actor/writer/director Lionel Jefferies (who is probably more famous for writing/directing The Railway Children and appearing in Chitty Chitty Bang Bang).

We follow a mother, Mrs Allen (Dorothy Alison) and her three children, who move from grubby 1918 London to a remote country pile to act as guardians of said estate. Whilst there, two of the children - Lucy (Lynne Frederick) and Jamie (Gary Miller) - befriend another young girl and boy. It turns out these new children are ghosts - of a sort - from 1818, where an unfortunate event occurred. Lucy and Gary set themselves on a mission to attempt to change the course of history to 'save' their new friends from an otherwise sad end.

Some - including film critic and broadcaster Mark Kermode- consider this is a forgotten classic. Perhaps it would work better as a film to watch with children or to re-watch if experienced in childhood - speaking as a childless (and possibly embittered) 30-something approaching it for the first time, I only enjoyed it up to a point. I liked Diana Dors as the grotesque housekeeper most of all, and the story was engaging enough. I sort of felt it was not one thing or t'other, though; not creepy/ghostly enough to compete with the great Victorian ghost stories, and a little bit too saccharine to leave much of a melancholy feeling despite an otherwise bittersweet story.

Also: the film is 'blessed' with a curious coda, where all the characters wave goodbye to the viewer, which was both very sweet and very awkward?!