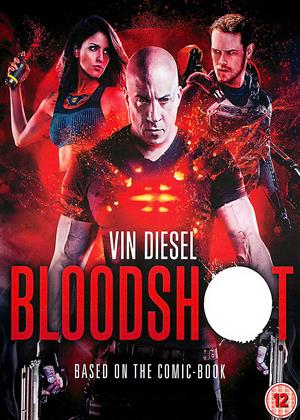 Never written a review before. However this film is Staggeringly terrible and a warning is required!

How underwhelming a film like Bloodshot must feel to the Fast & Furious crowd. After watching the muscle-bound bad-ass of Vin Diesel accomplish such impossible feats in those films of street racing and overblown theatrics, here the actor finds himself in a film that does his action-heavy presence little justice. Is it really that impressive to watch Diesel regenerate after being shot and punch his enemies through walls? The man has the movie identity of the tank and all this film really does is duct-tape a bazooka on the side.

Diesel isn't very interesting as Ray, a soldier who finds himself going after terrorists worldwide. On one mission where he barges in before backup arrives, he is wounded and captured by the enemy. A vicious and tap-dancing terrorist antagonist tortures him for information by killing his wife and then just murders Ray. Soon after, Ray rises from the grave thanks to a cybernetics corporation developing military tech. As explained by Doctor Harting (Guy Pierce), Ray's blood has been replaced by nanomachines to make him the unbeatable fighting machine. Ray can't remember how he died but once he does, revenge is on his mind most.

From that initial description, there's little doubt the mind will race to such familiar cyberpunk tales of Robocop, Ghost in the Shell or even the video game Deus Ex. While I don't find it entirely fair to look at this film by comparison to those old tropes, I couldn't help it with such a lackluster direction. Think about how Ray first discovers the extent of his abilities. He was once a soldier relying mostly on guns to beat the bad guys, still looking pretty tough in his former life of hooking up with a hot blonde. Now he is pretty much invulnerable. What does he do with his new abilities? He goes to the gym so he could punch a hole through a punching bag and lift the heaviest weights he can find. He'll also punch a wall pillar really hard. Not the most impressive display considering his Fast & Furious character could probably muster the same showcasing of his absurd strength.

For the first quarter of the film, it's super generic with Ray's story feeling too standard. There's a great twist, however, when it's revealed Ray's resurfaced memories were not only planned but altered. It's an intriguing development that's unfortunately ruined by spoonfeeding the audience all of this reveals far too early. Had the film been confident enough to slowly pull back the curtain rather than rip it off the rings, there might have been some thrilling aspect to this comic book picture. Sadly, everything is revealed so early that the entire second act can turn into a mindless mash of fists and blood.

Ray, or Bloodshot if we're going by his Valiant Comics name, is framed as an interesting idea for a character but not one worth giving a damn about. This most pronounced in one of his few exchanges with the evil doctor manipulating his mind, arguing at the anguish of being denied identity and freedom. Diesel is the wrong kind of guy to make this case, struggling to show that desperation and anger that he just can't manage, like watching Bruce Willis trying to perform Hamlet. He's not alone, however, as a host of other minimally developed characters accompany the adventure. KT (Eiza González) is the explicable love interest while the angry Jimmy (Sam Heughan) becomes Bloodshot's enemy by mere proximity. The only character present with even a hint of personality is the plucky hacker Wiggans (Lamorne Morris). Maybe it's the character's lack of cybernetics he has compared to everyone else with robotic body parts that seem to have had their charisma removed as well.

Bloodshot represents that kid on the playground who kept making up the rules as he went along. I kept hoping for Bloodshot to have some flaw in his new ability, where his nanomachines would burnout if he took too much damage or something. That doesn't appear to be the case. Any weakness is only invented as it goes along, be it an EMP wave required for shorting him out or some nanomachine countering weapon. The very idea of Bloodshot is not very interesting as a superhero as he is a military experiment that can't be controlled. Reflecting the experiment gone awry, this is a film that has potential but never finds the right direction to make it all come together and not just be a forgettable bit of a comic-book-inspired slugfest. And when that climactic battle is mostly CGI, Bloodshot as a character seems even less appealing to watch in action.