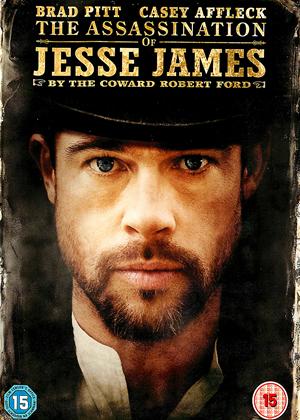 Not so much a Western as an exploration of the cult of the hero. Jesse James is shown as a bullying, violent, but disturbingly charismatic character who is idolised by his followers - who are also terrified of him.

The title of the film is from the Music Hall re-telling of his assasination - ironic in that the 'cowards' had to overcome their terror to rid the society of an evil despot. Yet that same society is shown to still idolise the criminal and despise the real hero - Robert Ford

This film was really excellent.

I know those used to MTV and action movies and who possess the attention span of a dyslexic puppy will hate it (so most Americans and teenagers then) - but it is worth sticking with through the so-called 'slow' build-up and story.

Why? Because it's a great story about great characters - AND is based on a novel. Those reviewers who thing this film 'too slow' so turned it off after an hour will probably have to ask a grown-up what a novel is...

Only boring people will find this movie boring...

sorry but why make this,and why so long on a week story? brad pitt suprises with his acting skills, but thats all there is,

mummbled speech( can someone start to teach these actors to speak with understanding in mind) and a hour too long,story covers only the last days,so dont expect a history from early days to the end,its not that sort of film,just boring waste of 2.1/2 hour,realy like westerns and cannot say there was one thing impressed at all.dont bother even when on tv its not worth the time.

Stylish, Powerful and Chilling - The Assassination of Jesse James by the Coward Robert Ford review by CP Customer

Jessie James even today remains a hero to some, while Robert Ford lives on as the coward. While the ending of this film comes as no surprise given that the legend of James grows. The journey itself is remarkable. How James dominated his gang with ruthless efficiency and yet managed to separate his role as a loving father with chilling ease is haunting. Brad Pitt is excellent here, a towering physical performance combined with great poise. However it is Casey Affleck that steals the show with his depiction of Robert Ford, confirming his talent. The film experience may be slow and methodical yet I found it to be an enchanting experience. One of the best films of its year for sure!

Long, excellent character drama rather than a Western. Highly recommended. - The Assassination of Jesse James by the Coward Robert Ford review by RP

There have been many films about Jesse James, many eulogising him as a sort of 'Robin Hood' character. There are popular songs about him [Aside: one of which is included near the end of this film, performed by Nick Cave]. If you want to know more about Jesse James and the James-Younger Gang, Wikipedia has lots of info.

The film tells the story of the end of the James brothers' long criminal career as Jesse descends into distrust and perhaps paranoia, trusting only the Ford brothers Charley and Robert. Unfortunately his trust is misplaced, as having already shot and/or betrayed other gang members, Robert Ford shoots Jesse in his own home.

'The Assassination of Jesse James by the Coward Robert Ford' is an excellent film which I enjoyed very much. The photography is excellent, the acting by Brad Pitt (as Jesse James) and by Casey Affleck (as Robert Ford) is excellent, and the directorial device of using a semi-documentary style with narration (often a lazy way of telling a story) works well here.

It's a long film at over 2½ hours but it held my interest throughout and I believe it needed that length to do the subject justice - it's more of a character drama than a Western.

Jesse is portrayed as a ruthless, violent criminal, albeit somewhat charming, rather than as Robin Hood. Robert Ford is portrayed as a naive teenager hero-worshipping the James outlaws from afar, then wheedling his way into the gang, becoming disillusioned, then betraying them. Also shown is the Ford brothers cashing in on their notoriety by way of a travelling stage show, through to Robert Ford's own assassination. And it's the length of the film which allows this lengthy tale to be properly told, rather than scrimped.

Got bored and turned it off after about an hour. No awful, just slow.